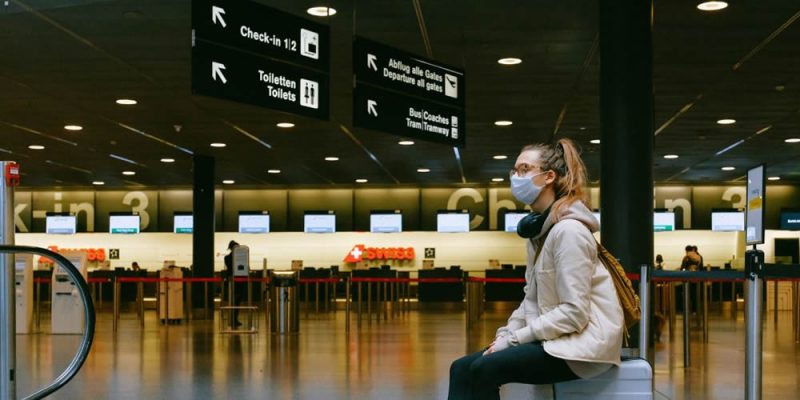 END_OF_DOCUMENT_TOKEN_TO_BE_REPLACED

As we move into the second half of 2020, we can only look back on the first half in amazement. In fact, 1H20 was a tale of two halves, for markets generally and the fixed income markets specifically. As we noted in our commentary for 1Q20 (https://www.xponance.com/u-s-fixed-income-q1-2020-update/) March was one of the worst months for excess returns since tabulation began, both for high grade and high yield corporates. The other spread sectors witnessed varying degrees of negative excess return, and Treasuries were truly the only game in town. Swift action by the Federal Reserve, coupled with extremely speedy action by Congressional standards, created the much hoped for v-shaped recovery in markets (and only in markets). Even with the fixed income market recovery, however, excess returns for all spread markets (even including US Agency MBS) remain negative for the first half. We point this out both to note that a significant financial crisis was averted but also to point out that risk-free assets were the only winning trade in fixed income markets for the first half, given the carnage in March.

Though the Federal Reserve will remain active in markets (specifically with the programs authorized under the CARES Act) until at least December 31st, much of the repair trade has had everything to do with the potential Fed put, not the actual Fed purchases.  The Secondary Market facility only began for individual securities (beyond ETFs) in June, and Fed activity has still not extended to the Primary Market Credit Facility, which would allow a company to issue debt directly to the Fed. Moreover, the primary facility has terms akin to a penalty rate and would likely go unused except in the most dire circumstances. Further, companies that would be the most likely to avail themselves of the facility would not be allowed to under its terms (i.e. distressed or high yield companies that were not investment grade at 3/22/20). Links to the various Federal Reserve Programs (including term sheets for the most recent programs) can be found here: https://www.federalreserve.gov/monetarypolicy/policytools.htm

The conundrum we face as fixed income investors is how to navigate the apparent disconnect between financial markets and underlying economic fundamentals. To be sure, financial markets are obviously not a reflection of the underlying economy, but the two should not be two different and distinct entities. For example, bank earnings over the past two quarters have reflected significant loan loss provisioning. This extensive provisioning illustrates longer term negative expectations for the real economy as well as uncertain balance sheet impacts, yet bank credit spreads continue to tighten, even as bankruptcies mount and signs of a more classic recession seem to be presenting themselves. With the employment to population ratio at the lowest level since records began in the 1940s, the US consumer economy could surely be in for significant challenges going forward, a primary driver of this increased bank provisioning, both directly from consumer loans and indirectly from the cascade effect on broader asset quality.

From a fixed income market perspective, however, the litany of Fed programs places a ceiling on how far credit spreads can rise. Fundamentally though, the amount of debt in Corporate America continues to rise even as earnings and cash flow have weakened. It has been a truism that spreads follow leverage over time. Higher cash flow leverage (classically, debt relative to EBITDA) equals wider spreads, at least for individual companies as compared to their peers. Current markets assume that higher leverage is a temporary phenomenon, yet it has been rising in aggregate for much of the period following the Great Financial Crisis (GFC), see Charts 1 and 2 below. Further, the default cycle is just getting started this time around, with bankruptcies already testing the levels seen during the GFC. Thus far, however, these have been highly concentrated in the consumer discretionary (primarily retail) and energy sectors, together accounting for greater than half of year-to-date bankruptcies.

Clearly, Treasury rates have remained low with Federal Reserve actions on both the reduction of the Fed Funds rate and forward guidance, but the shape of the Treasury yield curve is potentially telling a different story than risk markets. When the Federal Reserve slashes rates in response to negative economic developments, the Treasury curve generally steepens in anticipation of improved growth prospects and potentially inflation. At that point, markets assume the Fed is no longer “behind the curve” and yields move accordingly. This time the steepening, while pronounced, has been more muted than has historically been the case. Moreover, the curve has flattened since the initial Fed rate reductions occurred.

Another way we are thinking about risk for fixed income is by simply looking at the bond math as yields seem to go ever lower and durations lengthen. Given the economic, public health, geopolitical, and domestic political risks, there is little room for error at current yield levels. For example, both the broad bond market indices and corporate indices can only withstand about 20 bps of spread widening and/or interest rate increases before the yield is overwhelmed by the price change. That said, there remain pockets of value across sectors and securities, though opportunities have diminished since the panic at the end of 1Q20 and beginning of 2Q20 (see Table 1). 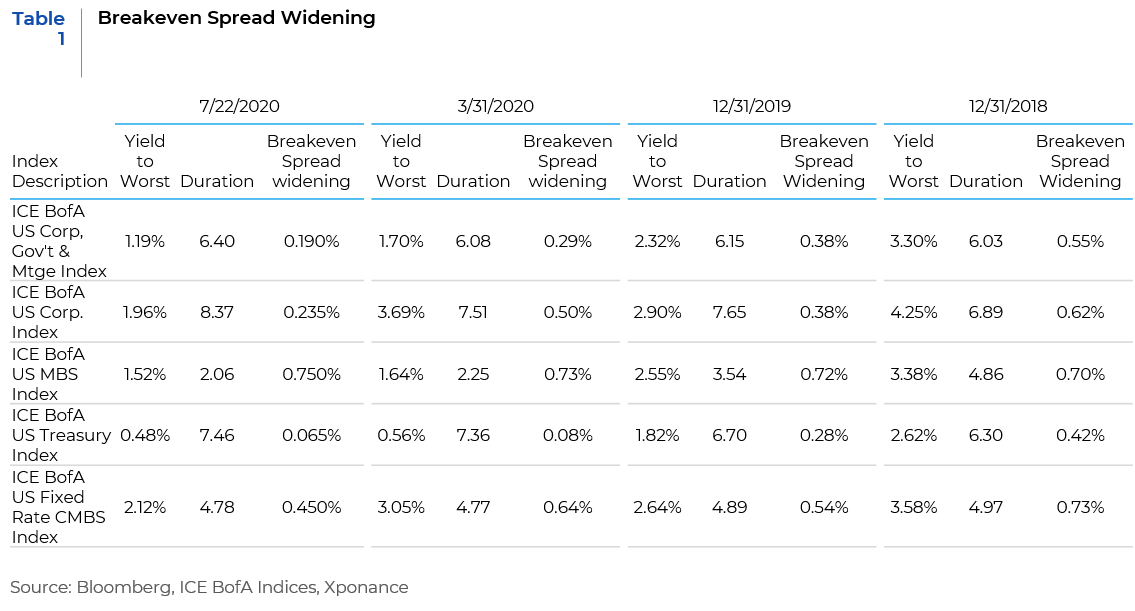 So, in the end, how should fixed income investors think about navigating the likely choppy and heretofore uncharted waters that will be with us for the foreseeable future? As always, understanding risk in the marketplace and the individual securities that make up the fixed income opportunity set is paramount. Despite the rising tide of leverage in Corporate America, there are still companies with good business models, secular tailwinds, growing markets, and strong or improving financial conditions. Likewise, there are companies that will have navigated the travails of the pandemic and innovate and improve their business models.  The less liquid corners of the fixed income markets are pricing in significantly more negative scenarios than corporate bonds or equities would have you believe. Commercial mortgage backed securities, for instance, seem to be pricing in a worst-case scenario for rents. Clearly, certain sectors of commercial real estate will fall on hard times, both temporarily and some in a more secular fashion, but there will be those that come out the other side. Many securities less touched by Fed intervention will recover as the economy does as the winning structures, sponsors, and underlying collateral separates the wheat from the chaff. We anticipate renewed bouts of market volatility as security prices and rating agency activity react to the shifting economic landscape over the remainder of 2020.