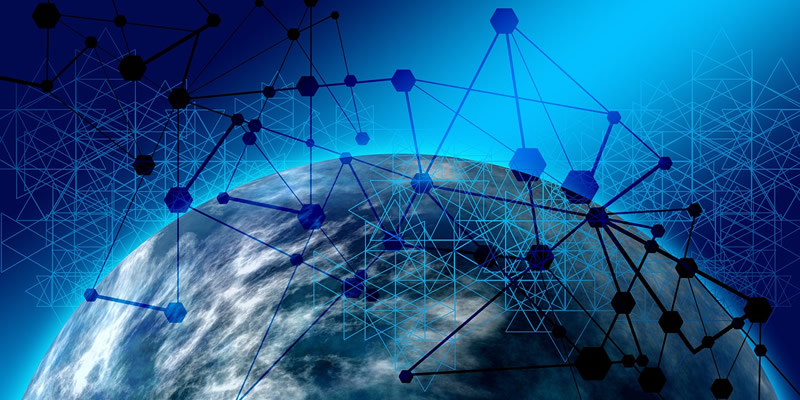 END_OF_DOCUMENT_TOKEN_TO_BE_REPLACED

​Equity markets posted strong returns in the second quarter of 2021 as a substantial decline in U.S. COVID-19 cases combined with a fast-paced economic reopening across the country led to a surge in economic growth that helped stocks rally to new highs over the past three months.  Almost all sectors had positive returns for the quarter.  However, over the course of the quarter, it appeared that equity markets were playing a game of ping pong with June seeing a reversal of leadership from May which in turn witnessed a reversal from the month of April. 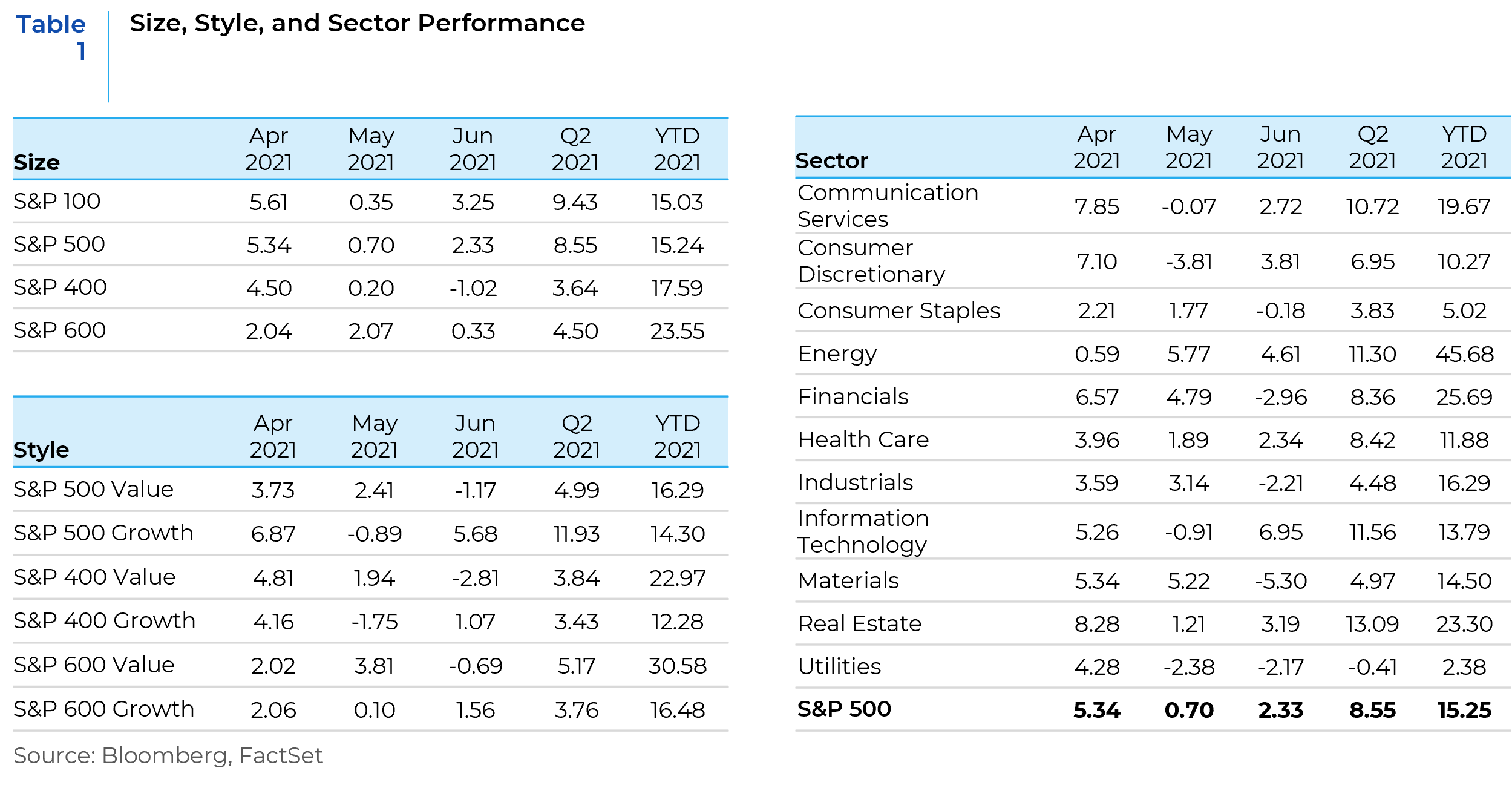 Several developments during the quarter influenced trends in equity markets. First, the pace of vaccinations in the U.S. accelerated meaningfully in April, with daily vaccinations hitting a peak of more than three million per day by the middle of the month. This increased pace of vaccinations combined with a decline in COVID-19 cases helped several states reopen their economies. That positive signal and the Federal Reserve’s reiteration to support the economy and not remove any accommodation in the near term boosted investor confidence in the sustainability of the economic recovery. In addition, first-quarter corporate earnings were very strong with the vast majority of U.S. companies beating earnings estimates. These positive factors helped stocks rally in April. The rally paused in May, however, due to uncertainty regarding inflation, the labor market, and the Fed’s timing for tapering its quantitative easing program. A disappointing jobs number in early May combined with inflation metrics hitting multi-decade highs, generated concerns among investors regarding the economic recovery and a return of inflation that could spur the Federal Reserve to reduce accommodation earlier than previously expected. Federal Reserve officials reiterated their long-held position that any increase in inflation would be temporary and due to pandemic-related supply chain disruptions, and they did not anticipate changing their accommodative policies in the near term. Investors were comforted enough for stocks to rebound in mid-May and close the month with a small gain. Stocks resumed the rally in early June, as measures of economic activity remained strong, and certain inflation statistics implied that inflation pressures were starting to ease. The June Fed meeting provided a small surprise to markets, as it revealed that Federal Reserve officials had begun discussions on when to reduce the current easing program. This caused some market volatility late in June, although the S&P 500 hit another record high during the last few days of the quarter. To summarize, the strong gains of the second quarter and the first half of 2021 were aided by continued government support for the economy combined with a substantial improvement in the state of the pandemic in the U.S.

The Federal Reserve signaling that it had begun discussions to reduce its QE program made investors nervous about slowing economic growth. As long term interest rates began to move lower, there was a rotation from value to growth equities, as seen in the graph above. With investors considering that the intensity of the economic recovery may have peaked in the second quarter and that the Fed may reduce QE in the future, markets saw a rotation back towards large cap growth and technology stocks, which tend to be less sensitive to changes in economic growth compared to other market sectors. By market capitalization, large-cap stocks outperformed small-cap stocks, which was a reversal from the previous two quarters. Small-cap stocks tend to outperform during periods of accelerating economic growth, like we saw in the fourth quarter of 2020 and the first quarter of 2021.

On a sector level, 10 of the 11 S&P 500 GICS sectors realized positive returns in the second quarter, however; indicative of the increase in performance concentration, only four sectors outperformed the return of the S&P 500. Real Estate and Information Technology were the best performing sectors. Real estate stocks were boosted by a decline in mortgage rates combined with consumers returning to malls and shopping centers, while a drop in Treasury bond yields helped fuel the rotation back to technology stocks. Sector laggards last quarter included Consumer Staples and Utilities as the former registered a small gain while the latter was the only S&P 500 sector to finish negative for the quarter. These traditionally defensive sectors outperform when investors expect an outright economic slowdown, and while some investors believe the acceleration in the economic recovery may have peaked, most are expecting the economic recovery to continue at a moderate pace, making these defensive sectors less attractive.

What to Expect in the Second Half of the Year?

The mood of the market as we head into the second half of the year can best be described as fading optimism. That should not be a matter of surprise to investors given where we are in the market cycle. After the explosive recovery boom experienced from the depths of the pandemic, economies and markets are slowly resettling back to their normal states. Amidst this environment, the debates range around the topics of inflation and the actions of the Fed on one hand, and the prospects for economic growth and its impact on style and sector performance on the other. Last but not the least, there is also a lot of talk regarding the risks to growth posed by the Delta variant of Covid-19, which has resulted in several countries outside of the US reimposing sharp lockdowns, negatively impacting economic activity.

The outlook for inflation is likely to determine the performance of risk assets. As seen in Chart 3, inflation is the dominant subject of discussion these days. The burning question that is being debated is whether inflation is transitory or lasting?

At this time, the consensus view is that the current spikes in inflation are temporary and that they will moderate in the coming months. While the Fed and other investors had expected inflation to rise this year as a surge in consumer spending collided with pandemic-related shortages and bottlenecks, the level of the last three monthly inflation readings have been higher than many anticipated. While inflation is expected to decline, questions abound over how soon and how low inflation will fall relative to the Fed’s 2% target.

At the June Fed meeting, 13 of 18 officials projected they would need to raise interest rates from near zero by 2023, with most expecting to raise their benchmark rate by 0.5 percentage point. Seven expected to raise rates as early as 2022. The projections surprised many investors because in March, most officials expected to hold rates steady through 2023. The Federal Reserve is under growing pressure to taper its asset purchases. It is very likely that the Fed will flatten its balance sheet towards the fourth quarter, thus curbing the liquidity overflows that have fueled the asset price boom.

However, what matters to equity markets is whether any monetary tightening the Fed undertakes is appropriate given the growth environment. In other words, what equity investors care about is whether the Fed is ahead, behind or on the curve. The Fed’s recent more hawkish stance towards inflation has largely removed the threat of runaway inflation. Gradual but steady improvement in the labor market and careful communication from the Fed over the coming weeks may result in the market discounting the coming taper and a muted reaction to the actual taper announcement down the road. In this environment, equities are likely to continue to eke out moderate gains over the summer with relatively low volatility. The flattening of the yield curve due to this stance from the Fed has made longer duration equities more attractive again, and the view that inflation will be contained lowers the requirement to hold inflation hedges such as commodities and banks, i.e. value stocks. This is clearly reflected in the sector performance shown in Table 2.

However, some exposure to value sectors is still warranted to hedge the tail risk of a continued increase in inflation but also because long bond yields should rebound as investors get more comfortable with the growth outlook. The recent yield curve flattening means this rotation out of reflation trades and towards a more broad market leadership is likely to continue for US equities. In this more “mid-cycle” equity environment, earnings fundamentals, rather than big macro moves, are likely to drive sector performance.

The other scenario is one that is characterized by persistent inflation. If inflation starts transitioning towards more persistent categories it will bring forward the removal of accommodative policy by the Fed. If inflation is proving more persistent partly because growth is also doing well, this would be a positive for equities, given they are nominal growth assets, and so benefit from higher growth and inflation. Equities can still perform moderately well but will most likely experience more volatility as investors rotate back towards inflation or rate-sensitive sectors such as Materials, Energy, and Financials because these provide a hedge to higher inflation, and more persistent inflation likely means higher rates. On the flip side, growth stocks could be at risk of losing out as rates expectations drive the rebound in yields. The riskiest scenario is one where growth slows because financial conditions tighten on a more aggressive policy withdrawal. In this case markets may start to worry about a more stagflationary outcome, which could lead to further curve flattening and therefore might be negative for equities. The probability of this happening is low, but is one possibility where higher, more persistent inflation and slowing economic growth will hinder equity returns.

Last but not the least, there is the question of the coronavirus Delta variant impacting economic growth. While hospitalizations have picked up in several states and are likely to increase further, relatively limited economic damage can be expected for three reasons. First, higher elderly vaccination rates should limit the increase in hospitalizations (Chart 6). Second, the generally higher immunity rates from prior infections in these states should also limit the increase in hospitalizations (Chart 7). Third, the virus sensitivity of economic activity tends to be lower in low vaccination states. However, there is a probability of high infections imposing a moderate drag on activity through three channels. First, high infections can keep travel and other targeted restrictions in place. Second, risk aversion among consumers can weigh on spending on face-to-face services. Third, survey evidence suggests that pandemic concerns are still weighing on labor supply in the US. Among the unemployed, fear about in-person work is the most frequently cited reason for not searching urgently, along with sufficient financial cushions. Sharp improvements in US labor supply are expected in the coming months as unemployment benefits normalize and vaccination rates edge up further, but a small degree of downside risk remains from lingering virus fears.