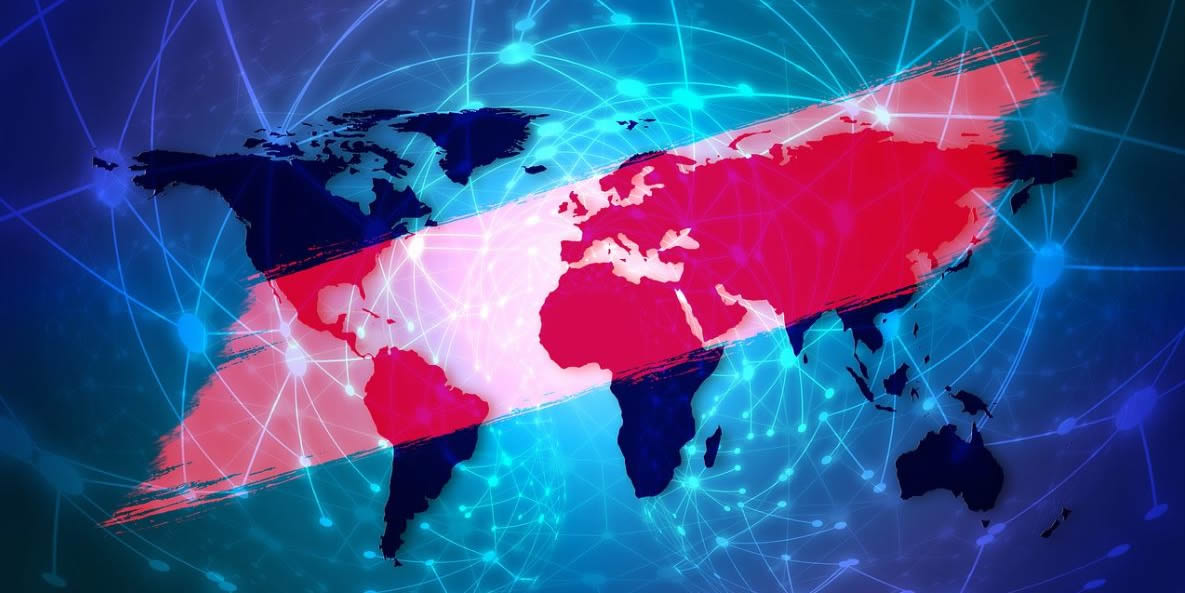 We are in strange and scary times.  We are at war with a virus which is all the more deadly in that it cannot be easily discerned but it is metastasizing geometrically.  Moreover, COVID-19 and the measures required to contain it are also exposing structural hurdles in our society and our financial system.

With respect to our financial system, this is not a rerun of 2008.  2008 was a liquidity crisis that morphed into a credit crisis which was exacerbated by bloated and over-leveraged household and financial sector balance sheets.  Today we are facing a selloff fueled by a public health crisis which has metastasized into a generalized crisis of confidence.  This crisis in confidence can only be alleviated when citizens and investors believe that policy makers have a handle on the rate of contagion and mortality from COVID-19.  Until this is alleviated, policy impetus will have limited value. This is why, despite being the epicenter of the COVID-19 virus, Chinese equities are now outperforming other markets.  In early February, Chinese equities were among the world’s worst performers (their decline started after state media reported on January 20th that human-to-human transmission of the virus was possible). During this time, American markets were, almost on a daily basis, climbing to record highs. Since mid-February, when the rate of contagion markedly reversed (see Chart 1), their positions have since been reversed. Equities have cratered throughout much of the world while it is China that has generated the world’s best-performance. As of March 18, the CSI 300 index, a benchmark of China’s biggest companies, is down by about 12.4% YTD and 11.4% for the trailing month.  In contrast, the S&P 500 index is down 25% YTD and 28% MTD.  Additionally, the Euro Stoxx index is down 36.3% for the year and 37% for the trailing month. 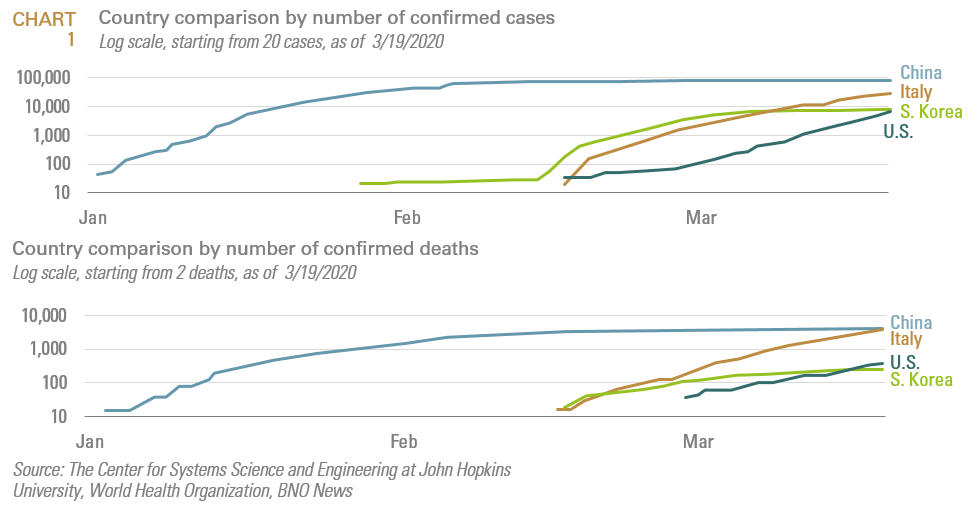 Bear markets occur in phases, and their narrative can mutate. What began as a selloff caused by the coronavirus outbreak could well mutate into an oil crash-related selloff, and then mutate again into a selloff due to policy impotence, or something else. The obvious risk to this scenario is that as economic activity resumes, there is another ramp-up in contagion. Therefore, our assumptions about the effectiveness of public health measures to curb the spread of the virus present a material market risk.

However, Global financial markets are witnessing the unwinding of the monetary policy put. For the past several years, the consensus in the global investment community was that risk assets could not go down because of policy puts from the Federal Reserve, the US Treasury and President Trump, the European Central Bank and the Chinese authorities.   With rates at near zero or negative levels, monetary policy will have a limited potency in stimulating economic activity. Nor do policymakers want it to; as more economic activity will only aggravate the public health crisis.  Recent market action highlights the danger of an income shock when rates are this low. Over the past week, real (inflation adjusted) yields have been rising, even as nominal yields, stocks, commodities, and gold were falling. A rise in the real yields facing borrowers into a slowing economy is a very dangerous combination, as it demonstrates that policy is tightening at a time when an easing is warranted. In retrospect, one could argue that the massive easing measures undertaken by the Fed and other central banks last year were deployed too early. So today we are left with a serious economic shock, with fewer conventional monetary policy tools; increasing the odds that the economic weakness from this shock will become self-reinforcing and difficult to reverse, lasting far longer than the virus itself. The dramatic market moves in recent days have increasingly priced in such a risk, leaving markets discounting that the coronavirus will have big implications for the long-term level of economic activity, corporate profits, inflation, and interest rates, with the zero bound a persistent obstacle.

One method for estimating how far stocks will fall is to evaluate whether expectations for the long-term growth of earnings discount maximum fear.  The market is currently discounting a long-term earnings discount of -2% vs. a previous trough of around -2.5% in 1974, 2008 and 2011.  Empirically, real bond yields and the expected growth rate are correlated.  The following table from BCA Research puts this in perspective (see Table 1).

The major caveat is if global central banks cannot tame the liquidity crunch currently taking hold of global markets or if it metastasizes into a solvency crisis, that the earnings discount rate could be even lower than the -2.5%; which would lead to much larger index drawdowns at all Treasury yield levels. That and a potential trillion dollar plus stimulus/treasury glut and a revised global supply chain could facilitate inflationary pressures. In that scenario, yields could rise further and the long-term expected growth rate could fall deeper.  Given the absence of visibility with respect to the path of the virus as well as these dynamics, we remain defensively positioned.

However, if the current bloodbath in risk assets persists, a market bottom could be reached well before bad economic data are released or COVID-19 infection cases peak.  Some of the indicators we are regularly gauging to change our risk profile include the following:

Finally, for those of us who have had the privilege of being able to work remotely (and it is a privilege that many in our country and world cannot even pause to contemplate let alone afford), I would encourage a moment of reflection on what both our response to the virus and its disparate impact exposes about our society and culture. My own reflections have turned to Frank M. Snowden’s Epidemics and Society: From the Black Death to the Present, where Snowden writes: “Epidemic diseases are not random events that afflict societies capriciously and without warning… Every society produces its own specific vulnerabilities. To study them is to understand that society’s structure, its standard of living, and its political priorities.”

COVID-19 is a disease that is all the more deadly because it hides in our bodies and preys on that most human of endeavors – social interaction.  In western democracies, it is thriving as a result of ideals that we hold most dear – individualism over the collective interest, freedom of movement, association, expression (even when dangerous disinformation is espoused), and a deep cynicism over establishment authorities and experts.  It is this cultural similarity that explains why Italy’s response to the virus is more useful as a benchmark than China’s or even South Korea’s.

I have come to believe that structurally addressing the most significant threats to our survival and our way of life — global pandemics, climate change, income inequality — require a structural change to our cultural mindset.  Our neoliberal ideals subsume collective endeavor to self-interest, encourage short-term thinking and organize our lives around the constant insecurity and stress that actively prevent us from thinking beyond the next fiscal quarter. This cultural paradigm also has a basis in biology:  research based on Functional Magnetic Resonance Imaging (fMRI) studies of test subjects present compelling evidence that the human brain is biased towards short-term, emotionally charged rewards and not long-term, logical goals.  Is it any wonder that despite multiple warnings on the urgent need for social distancing to “bend” the virus’ rate of contagion, that we irrationally hoard toilet paper and continue to witness crowded bar and beach scenes?

The coronavirus is a stress test or more specifically, a dry run for potential disasters to come. It’s a test of our ability to rise above perpetual present-tenseness and cultivate our capacity to cope with planet-scale disasters (such as pandemics and climate change) and universal imbalances, such as income inequality. It and all such overarching threats to our survival will always thrive by exploiting our major societal and biological vulnerabilities. I am confident that, or at least hope that, we will pass this test; even if barely so and not without a lot of grief, stress, and loss. But my hope is that COVID-19’s exposure of our societal failures and vulnerabilities will be instructive.  That the deep sense of interconnectedness, appreciation of our collective interests, and understanding of the wisdom of preparedness beyond the immediate and convenient that follows in the wake of this and all such tragedies will last beyond it.  That the countless medical professionals and first responders that are on the front line of the fight, that the restauranteurs and grocery store attendants that suffer through our anxiety and intemperance, and that the many random acts of kindness or encouragement rendered by everyday persons, will garner more adulation than our favorite sports or movie star.  So whenever we get a chance, perhaps we can start by thanking these heroes.  Because in them, and the character that undergirds them, lie our own salvation.

This report is neither an offer to sell nor a solicitation to invest in any product offered by FIS Group, Inc. and should not be considered as investment advice.  This report was prepared for clients and prospective clients of FIS Group and is intended to be used solely by such clients and prospects for educational and illustrative purposes.  The information contained herein is proprietary to FIS Group and may not be duplicated or used for any purpose other than the educational purpose for which it has been provided. Any unauthorized use, duplication or disclosure of this report is strictly prohibited.

This report is based on information believed to be correct, but is subject to revision.  Although the information provided herein has been obtained from sources which FIS Group believes to be reliable, FIS Group does not guarantee its accuracy, and such information may be incomplete or condensed. Additional information is available from FIS Group upon request.

All performance and other projections are historical and do not guarantee future performance.  No assurance can be given that any particular investment objective or strategy will be achieved at a given time and actual investment results may vary over any given time.