Home » Stories from Shanghai and the Mobile Payments in China

Stories from Shanghai and the Mobile Payments in China

China has a long history of pioneering revolutionary change in payments. Coins dating from at least 700 BC have now been found in China, making it the first place in the world (that we know of) to issue coins.  China continued to innovate with the inventions of paper money in the 9th century and the first fiat currency in the 12th century. Today China appears on the verge of becoming the first country to replace cash with mobile money. Many articles have tried to explain the scope of this change in numbers, but for someone who grew up in China, the change feels nothing short of phenomenal both for its scope and speed.

During my recent trip back home, I was captivated at how mobile pay has quickly penetrated seemingly every corner of the country, including my own hometown in Dalian (a second-tier city about the size of greater Philadelphia). From cafés to banks, farmer’s markets to restaurants, airports to train stations, mobile pay is so common that paying with cash, cards, or any other method already feels bizarre and ancient. They say even homeless prefer mobile pay over cash if you want to show some generosity.

Mobile pay in China is based on a smart phone and an account mostly with either WeChat (Tencent) or Alibaba. Both WeChat and Alibaba are already easily accessible and widely used by 99% of the mobile users in China. Thanks to the widespread use of smart phones and a robust 4G network, mobile payments in China have seen exponential growth in recent years. Since being launched in year 2013, mobile payments have rapidly grown to RMB 277 trillion in year 2018, 5 times larger than all other payments in China. (See Chart 1 and 2) 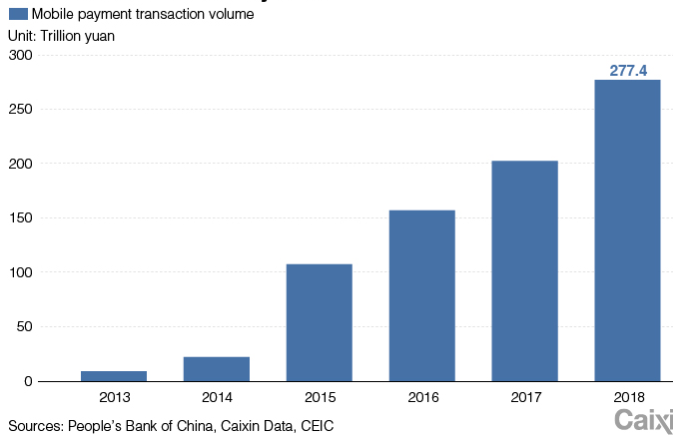 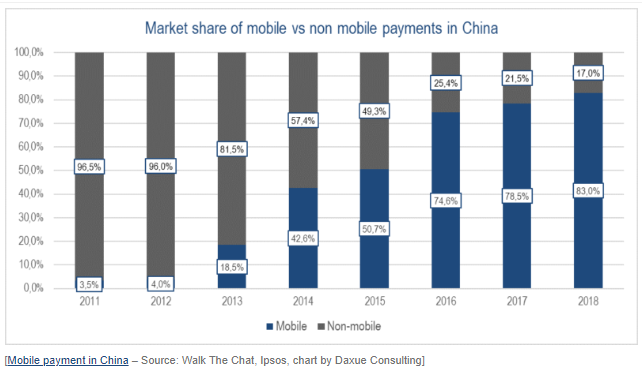 Unlike mobile payments in the U.S., mobile payments in China center around the use of QR codes. The process is hyper-streamlined: scan the bar code of the merchant, and then input the amount to pay; or let the merchant scan yours, and you approve the charge. It takes less than a second to scan and 3 seconds at most for the entire process. By comparison, this is much faster than Apple or Google Pay, where users have to choose a credit card and wait for bank approval in order to complete the transaction. Conversely, neither WeChat nor AliPay requires bank approval, as their payment system is based on a P2P (Peer-to-Peer) process. Just two steps – 1) open the app; and then (2) scan the bar code. No receipts are needed and every transaction is instantly shown in the pay history.

Besides convenience, mobile payments in China have a scale unlike anywhere else on earth. By way of comparison, the world’s largest economy, the United States, had an estimated 55 million mobile payment users in 2018 with approximately $500 in annual transaction per capita. By comparison, there were nearly 600 million mobile payment users in China last year, with about $28,000 in annual transaction per capita, 50 times larger than the US. Mobile payments are so common in China that they are expected to draw even with cash payments across the country by the end of 2019! 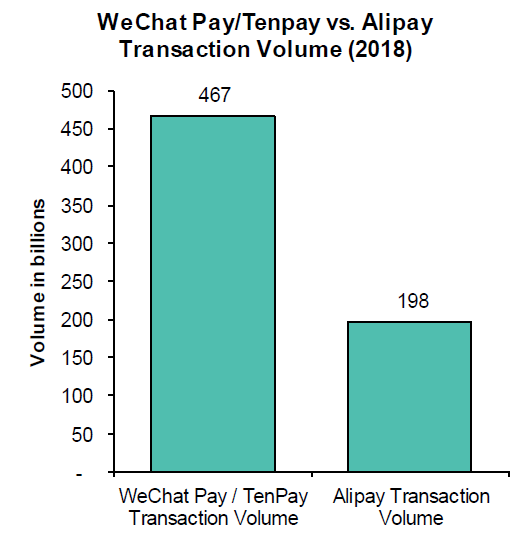 The newfound universality of mobile payments, and WeChat Pay in particular (See Chart 3), is further illustrated in my personal experiences during my recent trip home. In one case, my phone’s battery was down to 1% and I was still waiting for a taxi (called through Uber-like app in China). There happened to be a smart charger for rent in the lobby of a commercial building nearby. There was a WeChat bar code next to the charger and I used the 1% battery to quickly scan the bar code — and boom, a charger was produced by the machine. (see picture 1) 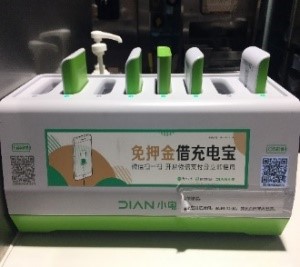 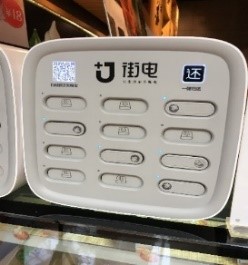 Another example is how WeChat pay has changed restaurant operations in China, where customers don’t need to talk to servers in a restaurant. Here is what they do: (1) find a table and have a seat; (2) scan the bar code shown on each table, immediately after which the restaurant menu is shown on the customer’s WeChat app; (4) order food and place order on WeChat app; and (5) payment will be processed automatically with WeChat pay once the order is confirmed. The whole system substantially speeds up the food ordering and preparation process with even less restaurant staff, a win-win revolution for both customers and business owners, though not so much for employees. (See picture 2)

Picture 2 –WeChat pay in a restaurant. 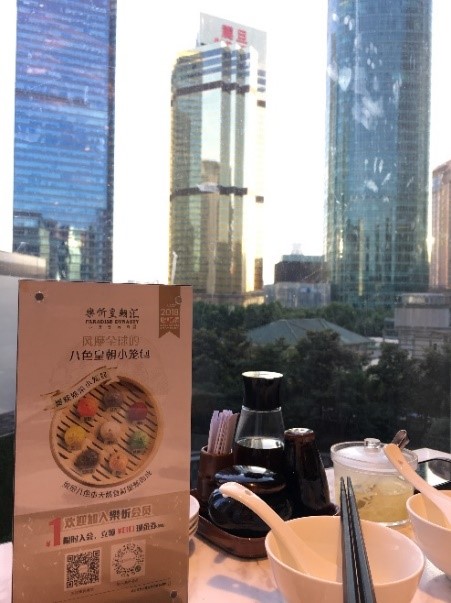 Mobile pay is also in nearly every taxi and grocery store I saw and even vending machines are now equipped for mobile pay! (See picture 3 – 5). 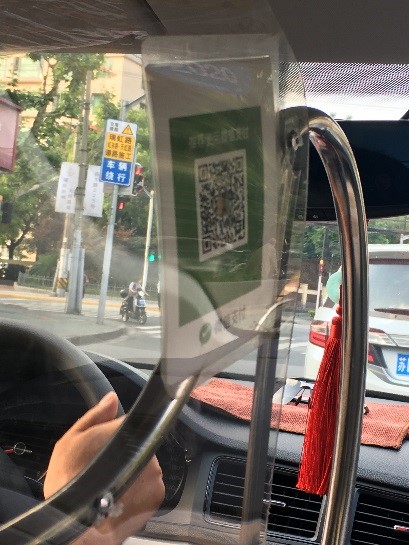 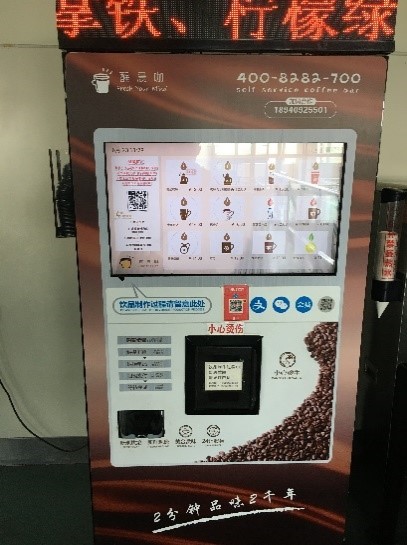 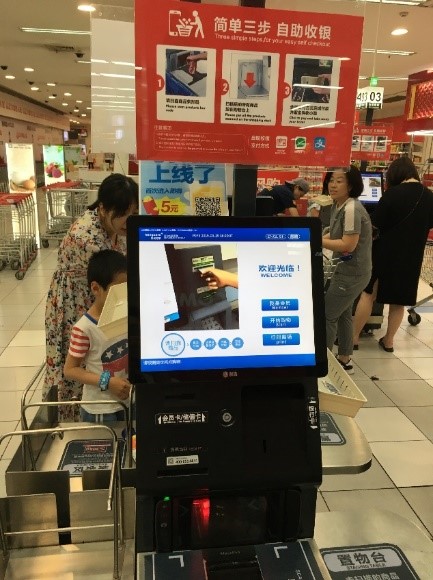 WeChat and AliPay’s success in China relies on a few factors: (1) a convenient payment process, (2) transaction volume, (3) market dominance, (4) minimal financial risk, and (5) universal acceptance and strong confidence of Chinese users. In fact, the overall product does not require any complicated technology or material infrastructure cost, but it has indeed launched a new era and perhaps the largest financial milestone in nearly a thousand years of Chinese history.

Mobile pay has reshaped people’s consumption habits and corporate operations across all industries in China. At FIS Group, we are not a stock picker, but focus on the macro, thematic level on a global basis.  Clearly businesses and industries that are able to adapt quickest and most effectively to incorporate mobile pay into their systems will be better positioned to attract new customers going forward. As shown in Chart 5, in 2017, mobile pay in China had its highest penetration (i.e. payments by Mobile pay versus all formats) in Restaurants, Malls & Grocery Stores, and Retailers, while still not commonly used in Health Care, Hotels, and Transportation.

Chart 5: The penetration ratio of mobile pay in various industries in 2017 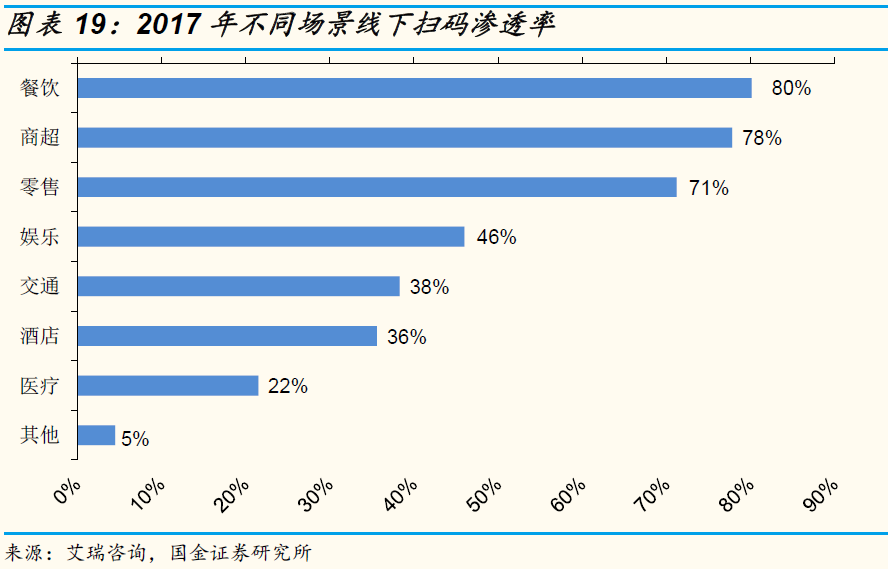