Our Q1 2017 Global Market Outlook, Who Knows? Navigating the Known Knowns and Underappreciated Knowns In Current Market Consensus, examines vulnerabilities in the bullish consensus narrative underpinning global equity markets. The key vulnerabilities discussed are U.S. dollar appreciation, elevated U.S. Small Cap valuations, questionable assumptions behind the bullish narrative on EM equities, as well as gathering geopolitical risks. The outlook also includes a note on whether the conditions for active management making a comeback may be falling into place. Following up from our 2013 study evaluating the cyclical and structural dimensions of active management performance, the outlook notes that with stock correlations seemingly falling, market dispersion rebounding, and the Fed’s plan to raise interest rates two to three times this year, the conditions necessary for active management to regain its luster are in place.

2016 was a year in which the pundits and other “wise ones” were roundly repudiated and the market just didn’t care. No major election played out as predicted by our so called best minds; and despite various predictions of Armageddon should the angry mob prevail, global equity markets shrugged off each event – Brexit, President Trump and the Italian Referendum – as minor rain showers that refreshed their combined 8% gallop over the course of the year. TABLE 1 summarizes the return of key indices and asset classes. 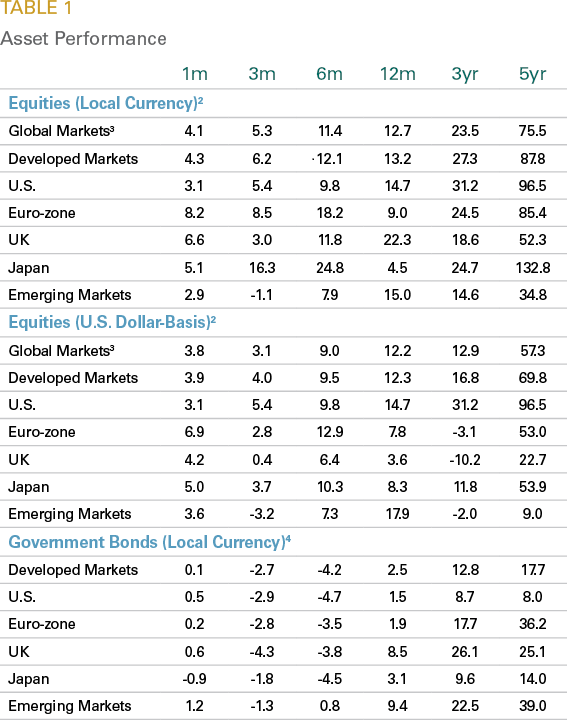 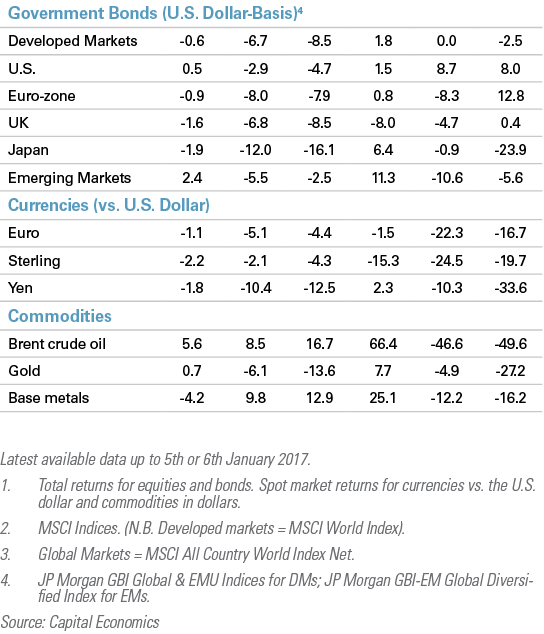 The title of this paper reflects our belief that 2017 is unlikely to bring reprieve from the policy and market uncertainty which ruled its predecessor. We of course borrowed and amended this title from former defense secretary Donald Rumsfeld’s description of the risks of the Iraq invasion and occupation to the press. It turns out that he was grossly over-confident in what he believed to be “known knowns” and thoroughly underappreciated the ‘known unknowns” and “unknown unknowns”. Those unknowns came back to ultimately haunt President Bush’s (43) legacy. We believe that the current equity rally and the underlying consensus narrative which supports it will face such a fate over the next three years. Therefore, BELOW, we examine the vulnerability of the consensus narrative underpinning the recent market rally relative to “underappreciated knowns” in a broad range of areas.

Our strategic and tactical views with respect to key countries, sectors and factor are summarized in TABLES 2-3.

The rationale for our global country and sector positioning can be found in the PDF version located HERE.

Who Knows? Navigating the Known Knowns and Underappreciated Knowns In Current Market Consensus

This year, investors will once again be holding their breath as France, Germany and the Netherlands face their own electoral crucibles amidst a wave of change elections that have rewarded populist insurgents. In the U.S., we will have a President whose self-described negotiating tactic is uncertainty and whose unconventionality is most frequently communicated through 140 character tweets. Finally, China’s ongoing struggle to maintain labor stability while addressing structural overcapacity caused by decades of credit fueled investment growth is likely to face even more uncertainty from a U.S. administration who has promised to label it as a currency manipulator, impose tariffs on its exports and challenge its regional hegemony. It is no wonder that policy uncertainty, which has markedly increased after 2008, is now at an extreme. (See CHART 1). 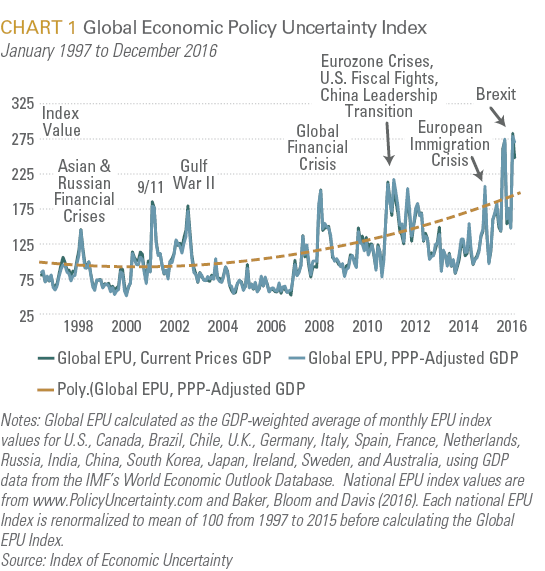 In such an environment, it is critical to be mindful of the changing policy and macro risks and most importantly, to evaluate the governing assumptions that underpin market consensus for underappreciated risks or “unknown” risks. For example, while we expect global equities to be higher in 12 months than they are today, the risks for stocks are tilted to the downside over both a shorter-term horizon of less than two months and a longer-term horizon exceeding two years.

The primary risks to the recent rally in global (and particularly U.S.) equities are that they are overbought; based on a consensus which is essentially pulling forward a “good news” narrative that is highly vulnerable to disappointment. Expectations of long-term U.S. earnings growth have also jumped to over 12%, something that strikes us as rather fanciful. Renewed rumblings in China could also spook the markets for a while. Consequently, we expect global equities to correct 5-10% from current levels, setting the stage for a more durable recovery. Once that recovery begins, higher-beta developed markets such as Japan and Europe should outperform the U.S. As the economy gains steam and inflation propagates towards the end of 2018, the Fed’s tightening is likely to get to more contractionary levels. A higher/rising fed funds rate will lead to multiple contraction. Since 1979 (when forward EPS data commence), every time the Fed has embarked on a tightening cycle, the forward P/E multiple has been squeezed. This eventually, is more likely to occur towards the end of 2018.

Underscoring short term momentum risks, as discussed in our summary investment outlook ABOVE, our equity risk models appear to be flashing caution. While both the social media and futures component of our equity sentiment models are solidly in risk-on territory; the systemic equity risk model which has developed a solid forecasting record over its 7-year existence; crossed from risk-on to risk-neutral on December 13 and remains there today. (See CHART 2). 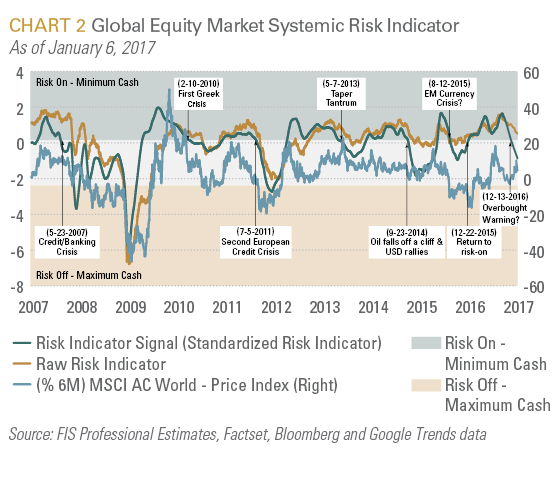 The Path of the U.S. Dollar is the Single Biggest Risk

The US dollar enters 2017 up by 25% against a broad basket of currencies over the last two-and-half years. The single biggest question for investors in 2017 and an underappreciated risk is whether the dollar continues its bull run. A dollar reversal would be largely neutral. A move by the dollar into even more over-valued territory would be destabilizing in various ways. Additional dollar strength in advance of the tax changes would hammer US manufacturers, leading to a sharp deterioration in the US trade balance that could prompt an even more protectionist response from Washington. And a stronger dollar could inflict severe pain on EM dollar denominated debt and certain EM equity markets.

Dollar bears note that the currency is overvalued in historical terms, argue the market is overly fixated on the possibility of President-elect Trump’s reflationary policies in the US, while ignoring improved fundamentals elsewhere. The dollar is now overvalued by most measures. Against the euro, yen and pound, the dollar is now one to 2.5 standard deviations overvalued relative to its average long-run deviation from purchasing power parity. Similarly, against a broad basket of currencies that excludes the renminbi, the US dollar is now stronger in real effective terms than at any time since 1986. (See CHART 3). With the dollar’s strength eroding US competitiveness, the rally is over-extended, especially against the euro, which is being held back by in part by an underappreciation of the area’s economic growth and exaggerated fears over upcoming European elections in 2017. (See our summary on geopolitical risks in TABLE 4 on PAGE 13). 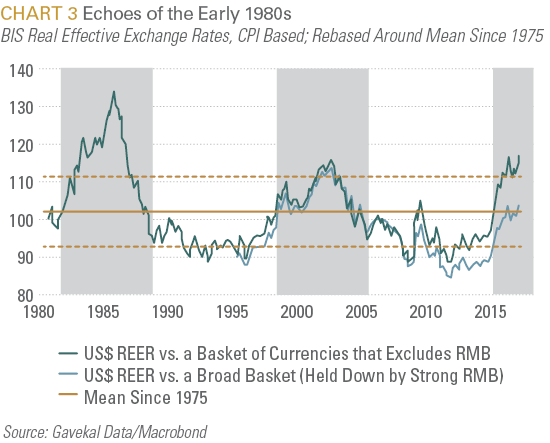 Dollar bulls point to widening yield spreads and the likelihood that proposed changes in the US corporate tax code could prove strongly dollar-positive. Additionally, while exchange rates may revert to the mean in the long run, deviations often go further and last longer than valuation-focused analysis suggests. With US interest rates rising, and yield spreads over Europe and Japan widening, there is a strong possibility that the dollar could move from overvalued to even more overvalued in the course of this year.

The dollar could also get a big boost from tax changes proposed by president-elect Donald Trump and Congress. Like the Reagan presidency in early 1980’s, the dollar entered into a structural bull run because of shifting ROIC (return on invested capital) expectations, as a result of so called “animal spirits” unleashed by corporate and capital friendly tax changes. The Congressional Republican majority is discussing border tax adjustments that would favor US manufacturers at the expense of foreign competitors in order to redress perceived imbalances in the global trade regime. Similarly, Trump’s advisors are discussing what would amount to a subsidy for US exporters and/or a tariff on foreign imports into the US. Such policies would theoretically strengthen the U.S. dollar to a degree that would eliminate any competitive advantage gained by US business. Greater policy visibility following Trump’s inauguration on January 20 could add further momentum to the US dollar’s climb.

We believe that the dollar is due for short term consolidation but will end the year higher in 2017, particularly against the Japanese yen and the Chinese RMB. While this will increase the geopolitical risks associated with protectionism, it will also constrain inflation and possibly result in another feedback loop whereby Fed policy hike intentions are thwarted by decelerating inflation.

“Known Knowns” That the Market Is Discounting

Both U.S. and non-U.S. equities are discounting a significant pickup in growth and earnings. This is supported by leading economic indices which show a marked improvement in economic activity irrespective of policy changes in 2017. (See CHART 4). 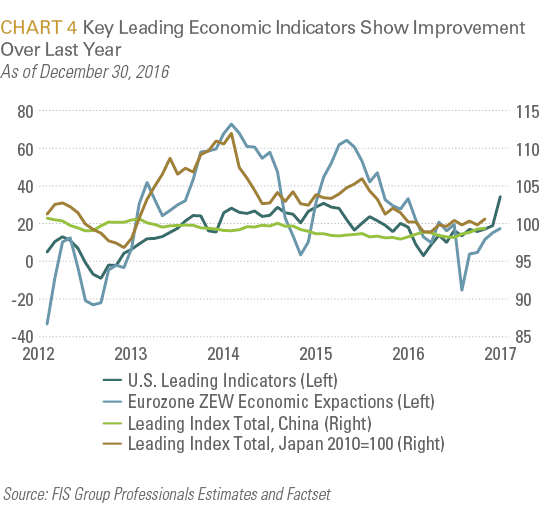 The nine key elements underpinning the bullish consensus on U.S. equities are: