Home » Profiting from MSCI Reclassifications: Oases of Alpha or Mirages in the Desert?

Profiting from MSCI Reclassifications: Oases of Alpha or Mirages in the Desert?

This month’s Foresights report, ” Profiting from MSCI Reclassifications: Oases of Alpha or Mirages in the Desert?“, is our critique of the CFA’s Institute’s Financial Analyst Journal article, “Investing in the Presence of Massive Flows: The Case of MSCI Country Reclassifications “. While we believe the journal article is an admirable attempt at studying the applicable MSCI country classification changes (upgrades and downgrades) since 2000 (in order to set forth a systematic trading recommendation), we believe that it simply examines past market outcomes from the top-down,  ignoring what was happening “on the ground” in these markets and thus draws correlated, but not causal inferences. We rebut the thesis from the CFA article and then share our case-by-case analysis of the forthcoming expected or possible upgrades, and our own recommendations of how one might look at trading around each event based on each individual market including:

When MSCI makes changes to their country classifications, trillions of dollars follow. A recent article in the CFA Institute’s Financial Analysts Journal attempts to apply some academic rigor to understanding how financial markets tend to react to these changes and puts forward a broad trading recommendation. Unfortunately, in simply examining past market outcomes from the top-down, the analysis ignores what was happening “on the ground” in these markets at the time these classifications occurred, and thus draws correlated, but not causal inferences. The analysis also suffers from statistically questionable decisions, as well as failing to account for the broader structural context of MSCI’s own rule-based classification decisions, which by definition, results in a structural correlation between the dependent and independent variables in the study. In this edition of FIS Foresights, we will review the recent article, break-down its flaws, and look ahead to the next set of expected upgrades, providing our views on how to trade around these opportunities given the individual contexts of these markets.

The article’s findings of significant outperformance from markets changing to more benchmarked indices rely substantially on the case studies of UAE and Qatar (see Table 1) which made the simultaneous switch from MSCI’s frontier markets index to MSCI’s emerging markets index in June 2014. But as we already elaborated in exhaustive detail in our September 2014 article, Arabian Nights: Mysteries on the Frontier, there was much more to this episode than MSCI market moves. MSCI’s announcement of the markets’ upgrades happened amid a massive recovery in both local economies, especially the real estate markets, following the sell-off and financial slump brought on by the post-2008 debt crisis in Dubai in particular. In our 2014 article, we demonstrated through a detailed stock-by-stock analysis of the markets’ performance, that these markets’ meteoric rise during this period was disproportionately led by the three listings with the highest respective exposure to the real estate market (Arabtec, Emaar Properties, and Masraf al-Rayan). Moreover, the rally did not commence with the upgrade announcement, and there was a wide dispersion of intra-market returns during this period, ranging from +226% for Arabtec to -7.69% for Dana Gas in the UAE or in Qatar between +118% for Masraf al-Rayan versus a mere +10% for Qatar National Bank (QNB). Indeed,the sparse relative returns of QNB, the largest cap stock in the MSCI Qatar index, but which underperformed the broader Qatari market’s returns by nearly 30% during the upgrade period, is a clear rebuke of the simplistic story that it was MSCI’s upgrade announcement that sent the market surging forward. 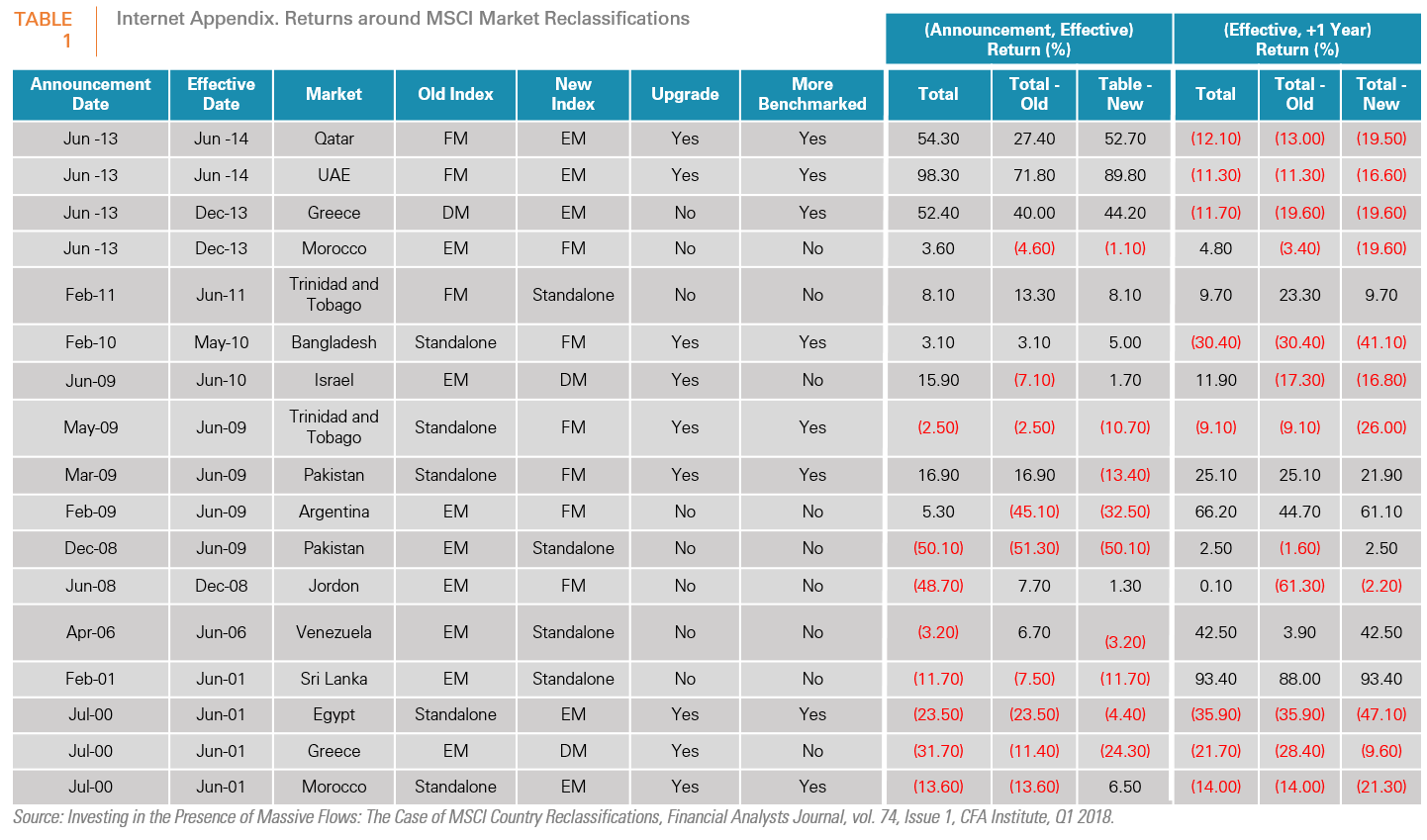 Over the study period of the article, MSCI’s country classifications had multiple different types of moves to examine. These included upgrades from frontier to emerging (as profiled in the UAE/Qatar case study); upgrades from emerging to developed (Greece 2001 and Israel in 2010); upgrades from standalone to frontier (Bangladesh 2010, Trinidad and Tobago 2009, and Pakistan 2009) and from standalone to emerging (Egypt 2001 and Morocco 2001). Then of course, there were also downgrades from emerging to frontier (Argentina 2009 and Jordan 2008); from emerging to standalone (Sri Lanka 2001, Venezuela 2006, and Pakistan 2009), and from frontier to standalone (Trinidad and Tobago 2011). To make sense of these many different variables, as seen in Table 1, the authors of the study under review sought to make broad claims by attributing each MSCI country classification change to one of two categories: moving from a more benchmarked index to a less benchmarked index (generally for downgrades) or from a less benchmarked index to a more benchmarked index (generally for upgrades). In this way the authors could (in theory) examine the net effects of added liquidity as the controlled variable in the study. While we agree with the logically sound principle of this two-prong classification system, where the ratio of benchmarking is very close, as is the case between developed and emerging markets (35% vs 40%, respectively for the 2013 downgrade of Greece) we don’t believe that the data supports a statistically sound conversion of the dependent variables (market classification) to the analysis’ more/less benchmarked claim, at least not for the 2013 downgrade of Greece from developed to emerging markets. The study then also does not provide supporting data to justify the claims that the other moves from emerging to developed markets (Greece in 2001 or Israel in 2010) were indeed from more to less benchmarked indices as the authors claim.

The claims that the three classification changes between developed and emerging markets can be categorized clearly between changes from less to more benchmarked indices are not sufficiently supported by the evidence in the study. Removing these three examples and the UAE/Qatar examples, changes the outcomes dramatically (see Table 2). No longer do upgrading markets outperform during the period between announcement and upgrade, but they do lose less money than during the one-year period following the upgrade’s effective date.

Trading based on MSCI announcements alone might be no different than a momentum trade. The variables are not sufficiently independent to justify a statistically sound broad study. 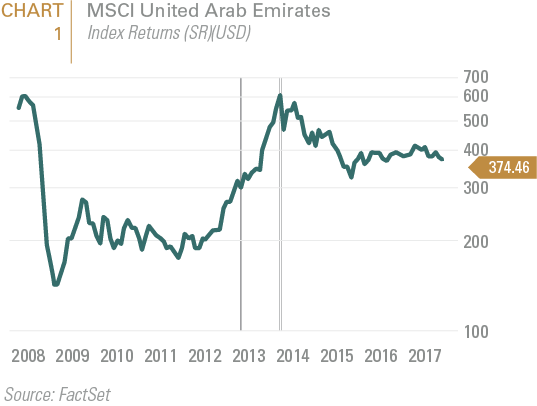 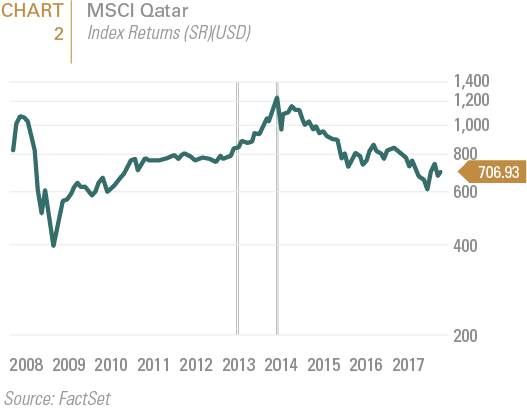 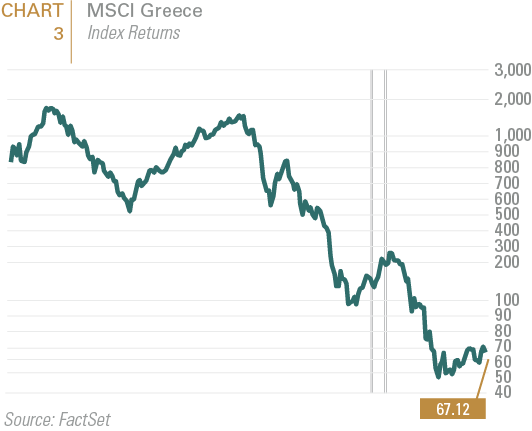 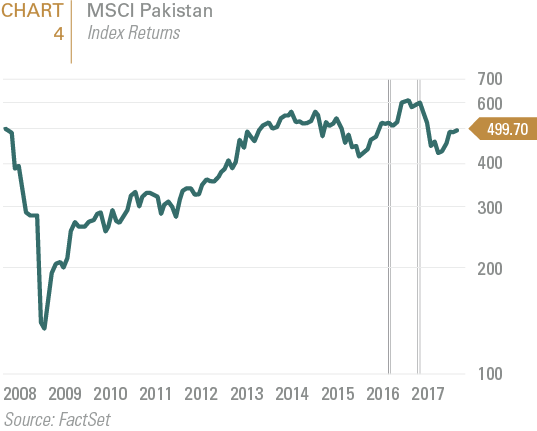 Hoping that we have sufficiently rejected the thesis from the article that a general trading rule around country classification announcements exists, we can now roll up our sleeves and look case-by-case at the forthcoming expected or possible upgrades and posit our own recommendations of how one might look at trading around each event based on each individual market’s circumstance.

In June 2017, MSCI announced that it will be including Chinese A-shares in its global indices. As we profiled in last year’s article, Whither the GEM Manager, this will eventually have a profound effect on the composition of global indices, and in particular, the MSCI Emerging Markets Index. But unlike with most of its other country classification changes, MSCI is adding A-shares to its global indices gradually, over the course of several years, thus diminishing the expectation among index front-running speculators to drive up prices in advance of passive flows. Moreover, the “MSCI expectations rally”, or at least a first go at it, may have already happened. The 75% spike in the A-share market in the Spring of 2015 was fueled in some part by speculation around MSCI inclusion (unfounded, as it turns out, but it was one of the stories the local brokers were spinning to their retail clients, nonetheless). Thus, we see the scope for another such rally as more limited in the future.

Given recent market reforms, Argentina is widely expected to be flagged for MSCI (re)upgrade to emerging markets from frontier in its forthcoming country classification review in June 2018. But in Argentina’s case, the upgrade was already widely expected in mid-2017 and was preceded by a huge rally that was buoyed by massively improving economic fundamentals, access, and liquidity, as well as an expectation of eventual MSCI upgrade. As such, in this case we also do not see a long trade in Argentina on the back of potential MSCI announcements, though we do remain cautiously optimistic on the market in general, though a bit more cautious than we were at the time of publication for our 2018 Frontier Markets Outlook.

As mentioned in our 2018 Frontier Markets Outlook, Romania is just an uptick of liquidity away from being upgraded to EM by FTSE and being watch-listed for EM upgrade by MSCI, either of which should in turn buoy some local investor enthusiasm, but here again, we believe most of this is already priced in. The Romanian Government made MSCI upgrade a political priority some 2-3 years ago, which is what led to the flurry of structural access reforms to make the current consideration by FTSE and MSCI even the possibility it is today. As such, local investors have been watching, and we believe pricing in, this event already, while positive market fundamentals have buoyed the market for a few years now. But as we also mentioned in our 2018 Frontier Markets Outlook, Romania may be at the end of this economic cycle, or at least due for some economic slowdown, over the coming 1-2 years. Thus, an upgrade announcement, should it come based on market technicals, may coincide with a slowing economic outlook, and thus does not present a high conviction long in our opinion.

In September 2017, FTSE/Russell announced Kuwait’s promotion to emerging markets following the establishment of t+3 and DVP settlement. We also expect Kuwait to be added to MSCI’s watch list for upgrade this June 2018. The market already traded up about 10% on the news last September before falling back amid underwhelming economic and earnings news. We believe there is some upside to the Kuwait upgrade trade, or at least the prospect of MSCI announcement provides a floor to a long call that is otherwise supported by fundamentals, as profiled in our 2018 Frontier Markets Outlook. We further believe that Kuwait will be a market that is better received by EM investors than it has been by frontier investors as the former are already a little less dogmatic about requiring a true “developing economy” to drive their investment research, having already crossed that bridge in comparably wealthy markets in Korea, Taiwan, the UAE, and Qatar. Meanwhile active frontier investors have generally eschewed Kuwait for its lack of strong economic growth prospects or pure developing economy “story”, not to mention higher relative valuations given the strong local investor base. Therefore, we believe that Kuwait could fare even better once it is fully integrated into the EM investor universe (including high dividend and other smart beta screens) than it could ever be expected to do with frontier investors.