In this issue, we discuss what may be the key to predicting the future of the world’s developed and developing economies: the intersection of demographics and technology. We hope our commentary will ignite further conversation around how some countries are facing the challenges of an aging workforce; how the relationship between workforce participation and productivity have changed; and why technology does not have to be the rapacious job destroyer that many fear.

“Demographics is the single most important factor that nobody pays attention to, and when they do pay attention, they miss the point.” –Peter Drucker, 1999

When the world’s population surpassed 7 billion a few years back, it triggered a media blitz of apocalyptic predictions of overpopulation and resource shortages. But those who study demographics knew that the story was much more complicated. As while the population is definitely growing, the population is also growing older. Between 1970 and 2015, the portion of the population that is over 65 has more than tripled and life expectancy has increased significantly. This is where the world’s real demographic story begins (see Chart 1 and Chart 2). 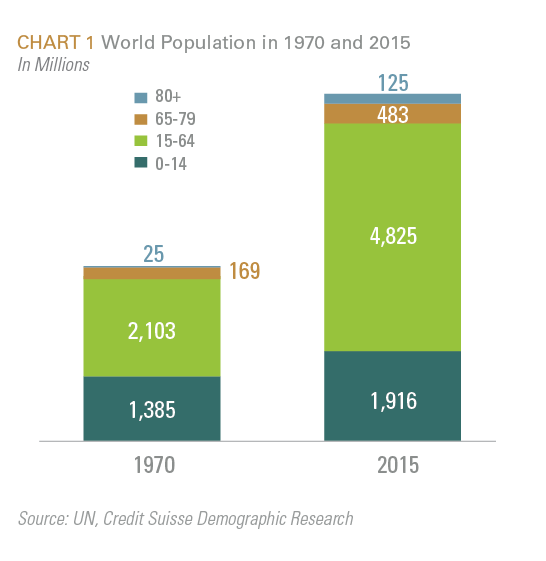 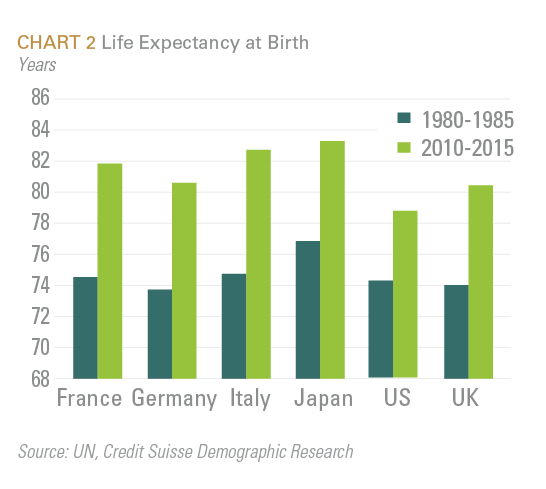 Starting with the premise that longevity has risen and the world’s population is aging, the world’s demographic story is important to investors both on a micro and macro level. On a micro level, it can be used to assess supply and demand to determine what businesses will be operating in growing markets. For example, an aging population should see more growth in demand for pharma than surfboards. On a macro level, demographic data can provide a unique understanding of a nation’s economic future which can have implications for markets, industries and companies. We have opted to explore the macro picture and have again gone outside the usual gaggle of market analysts. We have pulled from the work of Peter Zeihan–The Accidental Superpower, Kenneth Gronbach–Upside and various writings by former Credit Suisse demographer Alman Roy.

From their work, we have identified 3 basic demographic factors as a framework to assess a country’s long-term economic prognosis. We then provide some insights into the demographic state of the world and its implications.

1. The Need for Productive Labor

From a demographic perspective, a large population of working age adults (generally ages 16-64) is required to fuel economic growth. A labor force not only provides the engine that allows businesses to produce their products, but also earns wages that are funneled back through the economy to create demand. Chart 3 provides a demographic look at GDP Growth for several countries. In all cases, as the growth of the working age population has slowed so has GDP Growth, forcing countries to rely on higher work force participation and productivity to push their economies forward.

It is worth noting, however, that increased work force participation and productivity are tied together by technology and to some extent they can be inversely correlated. As technological advances drive automation, the per worker output increases. This rise in productivity could potentially lead to less workforce participation (i.e. unemployment) as machines replace workers. Historically, the result has been a process of creative destruction in which unneeded jobs were replaced by newer jobs sometimes in entirely new industries. Whether the alternative intelligence being developed today will maintain the same paradigm in this regard has not yet been determined. What is clear is that machines will not spend money so that consumer demand in an economy without workers could suffer. The effect of automation will need to be monitored going forward. 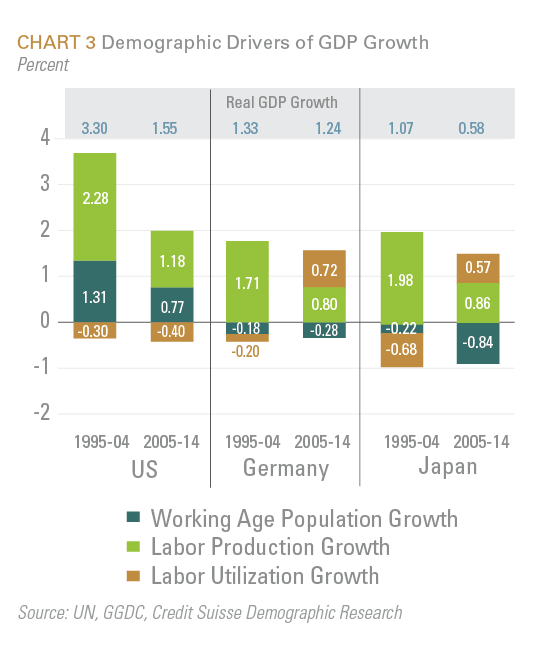 2. The Ability to Support the Elderly

An aging population implies a higher percentage of retirees who are no longer economic producers. These people are essentially dependent on their savings, pensions and social programs for their living expenses. The Old-age dependency ratio measures the ratio of a population’s elderly to working aged. To a large extent, it measures the amount of output by current workers that will need to be spent on supporting the elderly. Much of retirees’ income relies on funding, either directly or indirectly, from current workers, so a high dependency ratio can jeopardize that funding. The chart below shows that the dependency ratio has risen over the last 30 years for several developed nations. Japan’s ratio, in particular, has already reached an alarmingly high rate. As the population continues to age, countries with high dependency ratio will struggle to grow their economies (see Chart 4). This brings us to the final factor. 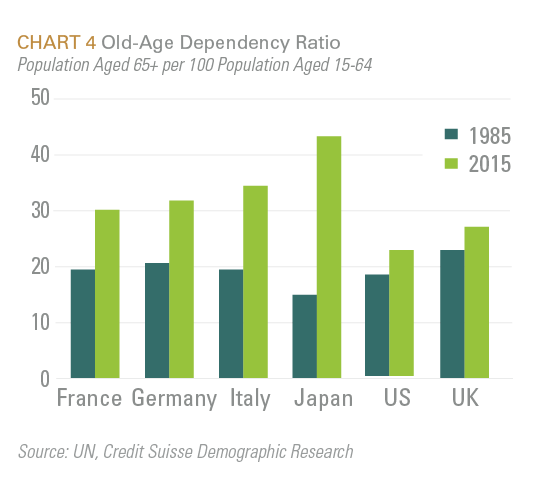 While children are usually financially dependent, they eventually grow into adults and enter the workforce. This is necessary because when current workers retire, an economy needs workers to replace them. Chart 5 and Chart 6 explain this concept. They are demographic “pyramids” that breakdown a population by age and gender. We chose to display the charts of India and Japan to contrast the difference between a healthy and unhealthy demography. Examining the charts, India’s picture is of a healthy demography; it looks like a pyramid (see Chart 5). Its population has more people in their working years than in their dependent years and it has a healthy group of young people who will eventually replace current workers when they retire. Japan’s chart (Chart 6), on the other hand, shows that the country has more elderly than children. As Japan’s population ages, they will likely face a financial crisis as the current slew of workers retire and there is no one to take their place. 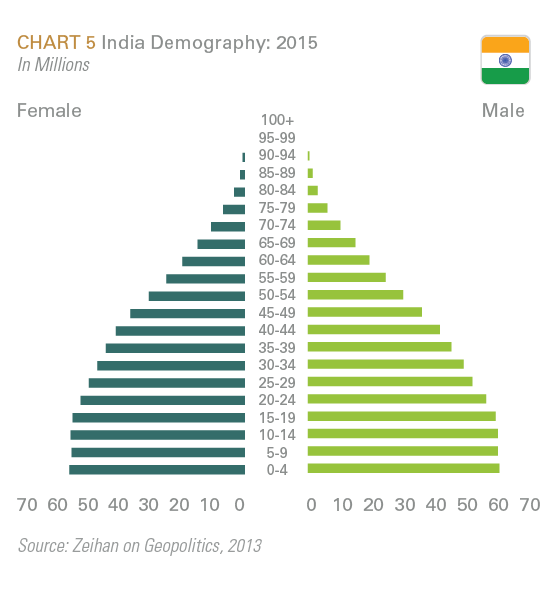 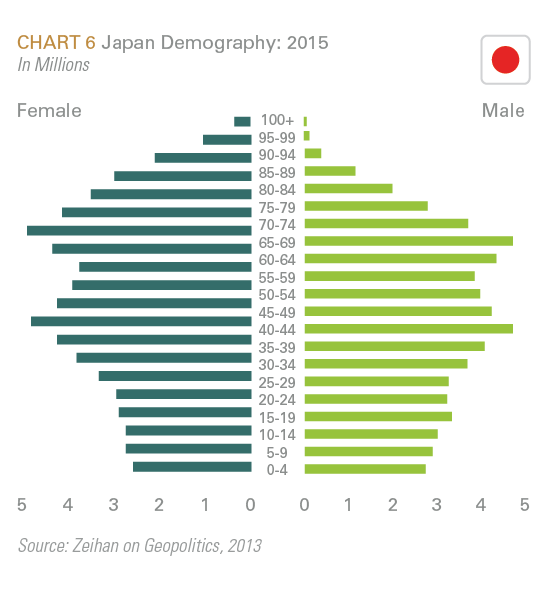 While a nation can change its demographic future, it is complicated. Birth rates, mortality rates and net migration all impact a nation’s demographic profile; however, statistically meaningful changes take many decades. This makes forecasting dependency ratios decades into the future more reliable than many other forecasts.

Using the Japanese example, it is unlikely that higher birth rates could significantly alter Japan’s demographic outlook as there is a limited population in child rearing years and it will be decades before newborns could meaningfully impact the workforce. Additionally, Japanese culture has historically been closed with low levels of immigration. There is no reason to believe that this will change. Therefore, it is likely that they will have an increasingly high dependency ratio into the future.

Using Data to Understand the World

As with any statistical information, drawing conclusions from demographic data in isolation of other factors can lead to poor decisions. There are many interconnected factors that will determine the world’s fate. Still, demographic data is a useful tool and can provide some clues about the future of specific countries.

From a macro perspective, the easiest conclusion to draw is that the aging population will require the workers of the developed world to work later in life. However, it is doubtful that longer work lives alone will be enough to ease the economic burden of an aging population. Emerging Market nations, on the other hand, have younger populations and will provide a substantial amount of the world’s labor and production. This will increase their relative economic importance to the world and provide a demographic wind to their sail.

However, by their very nature demographics are long term, so it is logical that the resulting investment ramifications reflect a longer term outlook. While the demographic picture of the world has been painted, the largest variable will be migration. Looking forward, the extent to which young workers from emerging nations migrate to the developed world to gain employment will be a key predictor of which nations will achieve long-term economic success. While evaluating migration patterns will be important, investors will also need to monitor individual country’s ability to attract workers through its policies, culture and economic strength to gain insight into how the world’s demographic story will unfold.

The caveat to this analysis comes from technology; specifically, the impact that developments in technology will have on the work force. There is a growing body of research that supports the thesis that rapid technological change destroys more jobs that it creates. This conclusion contradicts the historical paradigm. If proven true, the world will enter uncharted territory in which need for workers may be significantly reduced. But while technology has the ability to displace workers, it also has the ability to allow an aging population to be productive workers later in life. The former evokes fear of the obsolete human worker and mass unemployment, while the latter solves a major problem faced by the developed world.