Home » Is it Time for a Small Cap Resurgence?

Is it Time for a Small Cap Resurgence? 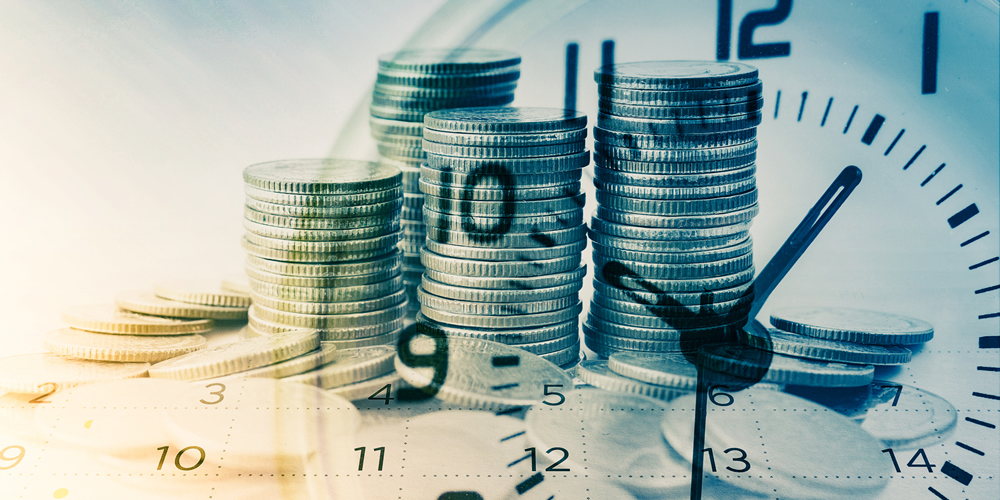 The recent past has seen extreme divergence in the performance of small cap stocks versus their large cap counterparts. We take a closer look at this underperformance and discuss the impact of different market environments on the returns generated by small cap stocks.  We then examine the million-dollar question – is it time for a small cap resurgence?  We end with an outline of the advantages of using systematic processes to manage small cap strategies.

A Look at Historical Performance

Although small cap stocks have historically outperformed large cap stocks as seen in the first chart below, that trend has been inconsistent since the Great Financial Crisis (GFC).  The outperformance of large caps when compared to small cap companies has been especially pronounced in the past couple of years (see second chart below).  There is a cyclical nature to this relationship between large caps and small caps with extended periods of time in which small cap stocks have outperformed their large cap counterparts, as well as periods of sustained underperformance. Relative valuation has generally been the primary catalyst for this shift in performance.

Profit margins for the large cap segment of the market have been quite strong in the post-GFC period and especially in the last two years.  This has been particularly attributable to above average returns among large technology companies (namely FAANGM). Additionally, small cap indices generally have a more pro-cyclical tilt because they are more leveraged to economic growth. With heightened concerns about the sustainability of economic recovery both domestically and abroad in the last few years along with the uncertainties resulting from the ongoing trade disputes, investors’ preferences have been focused on secular rather than cyclical growth.  Higher exposure of small caps to the financial sector has also impacted performance as declines in interest rates and the flattening of the yield curve have pressured margins in this sector.

When do Small Cap Stocks Outperform?

An acceleration in economic activity and higher interest rates tend to be catalysts for a rebound in small cap stocks. When the economy begins to emerge from recession and starts growing again, small-cap stocks can respond to the positive environment quicker and potentially grow faster than large-cap stocks. During recession small-cap stocks see larger declines in price; whereas in economic recoveries, small-caps can rise in price faster than large-caps.  The chart below shows that after every recession the relative performance of the Russell 2000 Index (small cap) has been better than that of the Russell 1000 (large cap) and this outperformance perks up even before the recessionary period has ended.

The Outlook for Small Cap stocks

In mid-March of this year when the economy was shutting down as a result of the coronavirus pandemic, small and medium businesses clearly suffered the most. The Russell 2000 Index saw its largest quarterly loss in its more than 40-year history. In contrast, large caps with access to untapped credit lines, the bond and equity markets as well as their own cash coffers did not suffer as severely. The Fed has now opened the liquidity spigots, the government has injected unprecedented amounts of fiscal stimulus, and the economy is starting to reopen gradually. At some point in the summer, we believe the pendulum will swing the opposite way and some semblance of normality will return to the US economy. This inflection point will likely serve as a catalyst for a resurgence in small cap names.  The first signs of it are already in the horizon with small caps seeing their best month since 2011 and their fifth best month ever in April 2020.

The correlation of high-yield bonds and small-cap stocks is one relevant data point that bolsters the argument that the rebound in small caps can be seen on the horizon.  High-yield bonds are often viewed as the bond market’s version of small-cap stocks, and investors generally expect both markets to move in tandem. The risk profiles of small-cap companies are more in line with typical high-yield bond issuers. This correlation is further exacerbated during times of economic crisis.  As illustrated in the graph below, the current correlation between these two asset classes are at an all-time high.  The announcement in early April by the Federal Reserve that indicated that it would buy ETFs that contained high-yield bonds to keep credit flowing through financial markets, provided a backstop to smaller companies. The positive impact of this step is starting to get reflected in the performance of small cap stocks. 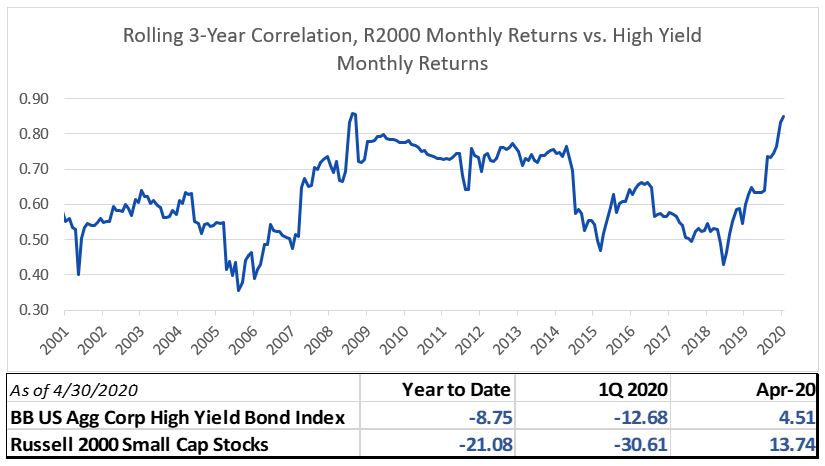 A large divergence in the valuation of large caps versus small caps and the high probability of a reversion to the mean also makes small caps looks attractive from an investment standpoint.  As shown in the two charts below, valuation levels for small caps are at or below their average using Price to Book and Price to Sales multiples while large cap names appear overvalued using those same measures.  As markets rebound, there is a high probability that small caps will at least revert to their average levels of valuation and experience multiple expansion. 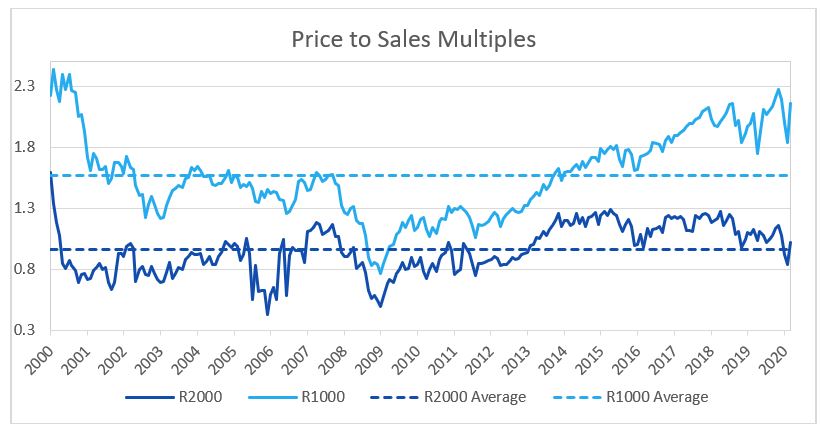 The rising trend of de-globalization can be another factor that works in favor of small cap companies.  Global supply chain dependencies are coming under scrutiny on the back of supply disruptions arising from the coronavirus pandemic. The US and other countries are starting to look at increasing self-sufficiency in certain areas, and the pressure to shift supply chains closer to home continues to intensify. As China’s share of global manufacturing rose from 3% in 1990 to 25% more recently, it had contributed to a wave of anti-globalization-well before the pandemic, but COVID-19 has turbocharged the trend.  This will favor smaller, domestically oriented companies, and brighten their prospects.

While no one can be sure what the market’s next sustained move will be and solvency, liquidity, and deflationary concerns associated with the current COVID-19 uncertainty could undermine the expected rebound in  small caps, the data shown above provides some compelling reasons to invest in small caps precisely when it feels most difficult to do so.

The Advantages of Systematic Processes for Small Cap Strategies

In ending this post, we wanted to highlight the benefits of using systematic quantitative processes for investing in small caps. Firstly, the small-cap universe is large and does not have a lot of analyst coverage relative to its large cap counterparts. Quantitative methods can screen large universes systematically and use factors that are independent of analyst estimates to identify attractive names.  Secondly, liquidity and transaction costs are important factors in small cap investing. Models can be used to quantify the impact of these factors and integrate them directly into the investment process. Thirdly, small caps tend to be the riskiest in nature, and systematic processes do a particularly good job of managing risk. Last but not the least, is the area of portfolio construction. Systematic approaches used to build portfolios using a scientific process are not just focused on buying a collection of well-liked stocks.  Portfolio construction is not done through a judgmental, subjective lens. The quantitative process is about ranking everything from highest to lowest and then trying to buy the highest names and sell names that are going down in rankings. It is a disciplined process that is not based on emotions, feelings, or biases regarding the product or service offered by a company or their management. Buys and sells are done objectively and systematically.