Home » Chinese Tech Stocks – Is the Party Over?

Chinese Tech Stocks – Is the Party Over?

‘Chinese Tech Stocks – Is the Party Over?’  discusses whether the boom in Chinese tech stocks will last. In 2017, Chinese tech stocks soared, essentially doubling in value during the year and outperforming the MSCI Emerging Markets (EM) Index by over 56 percent. However, the returns were largely concentrated in four mega-cap stocks: Tencent, Alibaba, Baidu and JD.com. This sort of extreme concentration of performance and holdings weight is a significant challenge to active management in general, and to the sort of high active share boutique managers that FIS Group targets in particular. The new index concentration poses a structural problem for high active share managers who seek to outperform an industry benchmark, without seeking to replicate it or be bound by it. Such managers must either break with their own tendencies and rules born out of experience, prudence and risk aversion or hold their noses in adopting limits based on third party indices. Looking forward, a key question for investors is whether these stocks will continue their meteoric ascendency, mean revert, or merely level off somewhere in their current stratosphere.

In 2017, Chinese tech stocks soared, essentially doubling in value during the year and outperforming the MSCI Emerging Markets (EM) index by over 56% (93.5% to 37.3%). Moreover, the returns were largely concentrated in four main large and mega-cap stocks, on Tencent, Alibaba, Baidu, and JD.com. Adding in South African-listed Naspers (whose value is as a holding company of Tencent stock) and these five stocks alone, which began 2017 as a mere 9.1% weight, accounted for nearly 22% of the overall gains in the index. These five stocks now comprise approximately 13% and the Tencent/Naspers position alone is now a total weight of 7.7% of the MSCI EM index!

This sort of extreme concentration of performance and holdings weight is a significant challenge to active management in general, and to the sort of high active share boutique managers that FIS targets in particular. As a result, our own EM composite substantially underperformed the broader index in 2017. Most boutique portfolio managers in our universe pride themselves on their index agnosticism and apply their own independent position limits to their portfolio construction. Some “index aware” managers will flex those rules to allow for higher weights of certain mega-cap index positions, but rarely will they permit overweight positions relative to the index weights attributable to these stocks. Indeed, most of our managers with portfolios of 40-50 stocks apply a maximum 5% position limit, but in practice generally hold their positions, even high conviction ones, around the 3-4% level. Our managers that deploy systematic strategies struggle even more with such concentrations, as the very philosophy of systematic active management typically belies highly concentrated portfolio positions, relying instead on an edge in factor selection to derive alpha. Thus, even if they had high conviction in a stock like Tencent, and many do, few would dare hold the stock at a 7.7% weight on par with MSCI’s passive “conviction” in that company.

This new index concentration poses a structural problem for high active share managers who seek to outperform an industry benchmark without seeking to replicate it or be bound by it. Such managers must either break their own tendencies and rules born out of experience, prudence and risk aversion or hold their nose in adopting limits based on third party indices. Where our clients permit it, we smooth out these structural idiosyncrasies of working with high active share managers with our own tactical overlay strategy. In other cases, we are supportive in advising our clients where such gaps may lie to ensure they are equipped to do so themselves should they so choose.

Looking forward, the other key question for investors is whether these stocks will continue their meteoric ascendency, mean revert, or merely level off somewhere in their current stratosphere. While there are some clear (and potentially significant) downside risks to these stocks, we believe the most likely outcome is that they will at least hold their ground, and likely continue to grow commensurate with earnings and the rest of the Chinese market for the coming year.

To recall, the Chinese government does not permit foreign participation in the internet and media sectors. Thus, in order to raise capital on the public markets, these internet companies used a structure known as Variable Interest Entities (VIEs). Much has been written elsewhere on VIEs, so we will not belabor that here, but in part as a result of these questionable governance structures, the sector was held at a discount to global tech peers until this past year. Although the legality and security of the VIE structure is no less unclear today than it was at the beginning of 2017, somewhere in late June/early July the market seemed to have cast aside all doubts and initiated the massive run-up, and relative re-rating of the Chinese tech stocks (see Chart 1). 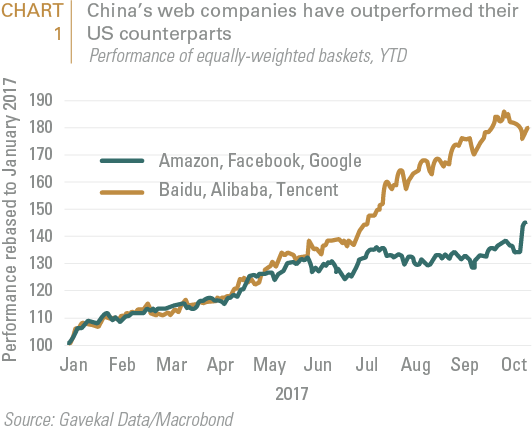 Moreover, relative to earnings, Chinese tech stocks are now much more fairly priced relative to their major American counterparts than they were at the start of 2017 (see Table 1). 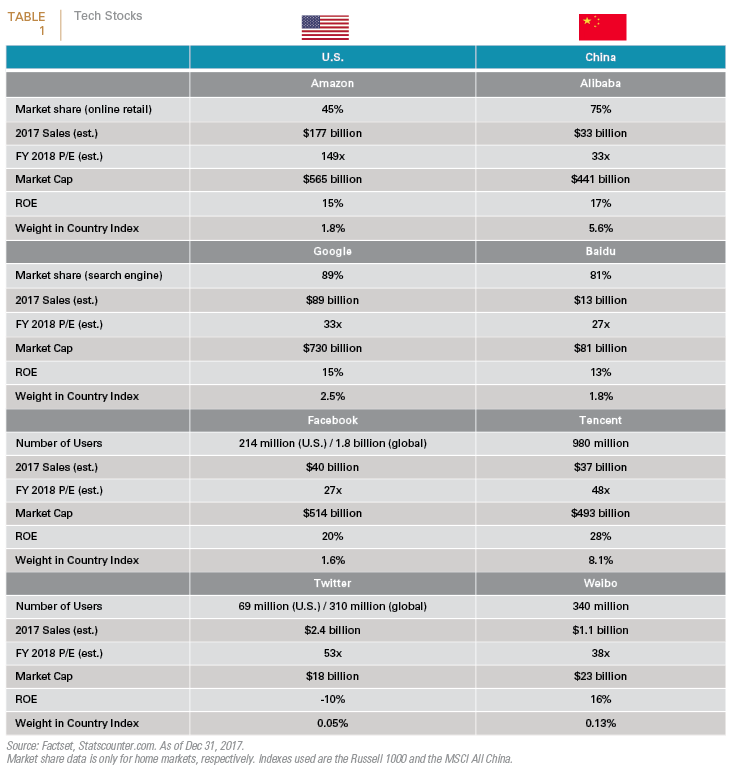 In addition to having diminished their scope for a relative re-rating, these tech stocks also now have very little scope for further analyst upgrades (as they are all now almost universally well regarded on the sell-side). This leaves organic earnings growth as the major support point for further price appreciation. But here too, things look fairly rosy. Consensus estimates are for 20-30% growth across the sector in 2018, so these stocks are unlikely to double again, but could still see meaningful gains if expectations are met. However, there are also signs that the low hanging fruit of capturing market share in the sector has been picked. Analysis by Gavekal indicates online retailing market share already reached its peak vis a vis total consumer goods sales in China (see Chart 2), which is in part due to the lack of falling delivery costs over the past two years (see Chart 3). 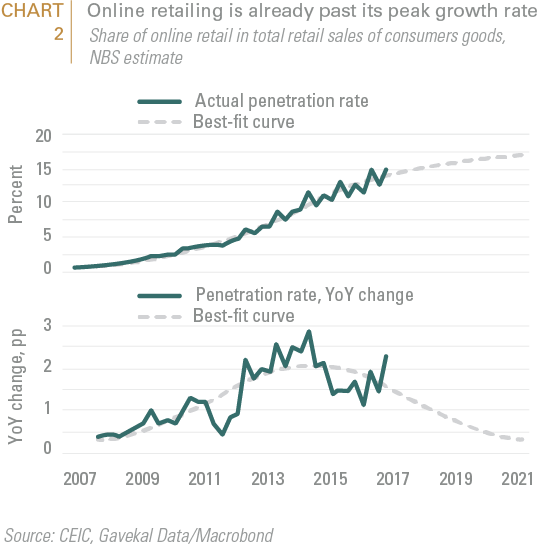 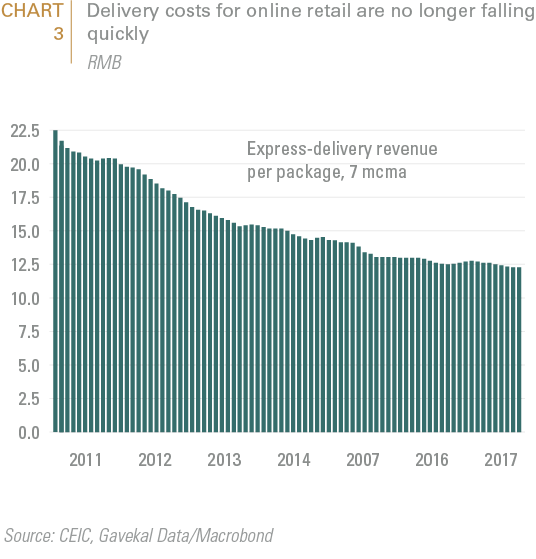 The uber bull case for Alibaba, Tencent, and others rests more on the segments they have yet to conquer, including mobile payments, ride-sharing, and even global cinema (e.g. Tencent Productions) or the markets they are seeking to enter in India and Southeast Asia. But in many of these segments there are existing and equally deep pocketed players (such as Amazon outside China) and profitability may be harder to come by absent government protections from foreign companies. In mobile payments and other areas on the periphery of the financial system in particular, firms like Tencent are very careful not to be seen as “disrupters” of the system, but instead prefer to be seen as “enhancing” the existing market structures.

This then brings us full circle to the VIE structures’ less than ideal governance situation and the Chinese discount that was initially placed by the market on these companies. In China, in contrast to the U.S. and Europe, local internet companies live with a permanent existential threat that the government could, if or when it so desired, snuff out their businesses at any time. Clearly doing so is not in the current government’s interest, and indeed the domestic internet oligopoly effectively strengthens Party control in both material (personal data) and indirect (the prestige of global market champions) ways. But the quid pro quo of these firms’ market dominance is clearly to tolerate a certain amount of government involvement, or at least ring-fencing, of their businesses. Already, the Chinese Communist Party has asked for and received Board seats on some of the more sensitive media and education oriented subsidiaries. Some ventures will be roadblocked or detoured by unforeseen government sensitivities, such as the recent accusation in July by a People’s Daily (a Chinese government mouthpiece) editorial singling out one Tencent game as a “poison” that was ruining the minds of children; but this is understood as part of the nature of doing business in China. But there is always the outside risk of one of these firms, or its key executives, stepping too hard on the toes of the wrong sensitive issue and seeing their shares tumble on fears of effective government expropriation of their business.

We add to these normal Chinese variables, the variable at 1600 Pennsylvania Avenue. The Trump Administration is reportedly preparing a series of “shock and awe” trade penalties against China in the coming weeks and months (see article). Should these announcements spark the long-feared trade war with China that candidate Trump essentially campaigned on, a foreign selloff of Chinese assets could ensue. While the Chinese tech companies ultimately have little business with the U.S. (other than their stock listing in some cases), and 14 months of Trump Administration seem to have already inured the market to overreacting to his announcements, this is an area that the executive does have broad authority over and could create meaningful economic frictions and stoke fear in the markets.